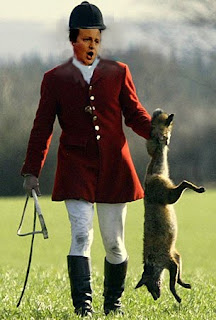 By voting tactically in all marginal constituencies, Labour and progressive Liberal supporters can ensure that the Tories do not get an overall majority. This is what you must do:

If your constituency is a Liberal/Tory marginal vote Liberal. This will help to stop the Tories getting an overall majority. Do not waste your vote where you know it can't count.

If you are in a Labour/Liberal marginal (e.g. Hampstead & Kilburn), do not under any circumstances vote Liberal as that will merely tend to make the Tories have more seats than Labour, which will end up with the disgrace of the Liberals selling out to their immemorial enemies, the Conservative party.

If you are in a 3-way marginal and your priority is Stop the Tories, vote Labour - even if you are a progressive Liberal.

2) To progressive Liberal voters: If you are in a Labour/Liberal marginal constituency, vote Labour even though you are a Liberal supporter.
This is the way to stop the Liberals from coalescing with the Conservatives. If Labour have fewer seats than the Tories you will end up seeing your party in coalition with the Tories, which is not good for either the Liberals or the country. It would destroy the Liberal party utterly.

3) If you are in a 3-way marginal constituency, vote Labour as best way to stop the Tories, even if you are a progressive Liberal.

Don't forget Labour have promised a referendum on a more proportional voting system within a year. Therefore voting Labour in this election can correctly be viewed as better for the Liberals than voting Liberal.

Email ThisBlogThis!Share to TwitterShare to FacebookShare to Pinterest
Labels: editorial