"Listening to Nick Drake with an injured neck, then writing a bad poem. I'd been in the England Colts rugby squad and played cricket for Leicestershire, but laid up in bed I realised I wasn't going to be 6 ft 4 or bowl at a 100 mph. All that fiery energy had to go somewhere else, instead of just being doused with drink. So I started writing"

You know what we're going to say: New Short Stories
Posted by wire: 10:19 pm No comments:

There seems to be a proliferation of this sort of case. What the hell is wrong with these marauding swine?

Picture the scene in a native American teepee, with a cacophony of "sound systems" booming outside. Stephen Moran read Dundee poet Susan Kennedy's remarkable and moving, "Proper poems will not be written" followed by Mikey Delgado's sublime "There is about half a white moon tonight" and finished on his own less certain (I felt) "Ballad", all from Last Night's Dream Corrected.

See this link for more from the shy poet who read "Poems that need no Introduction. No. 1: The Introduction" (also from the previously mentioned anthology) and two other poems, including a very good evocation of an American location, with shades of "A River Runs Through It".

After decamping (literally) to the arboretum at Herald House, the evening continued with Brian Curran's "Tea with Stephan", a unique double-take on memory and assumption.

An intermission, while necessary refreshments were taken on board. Due to the influence of global warming, which seems to consist of both raininess and dryness, but in this case raininess, we then had to adjourn to the Herald boardroom, following a call to Red Woodword for the security keypad combination. There the evening continued with Vanessa Gebbie reading "On the Edge" a tale of corruption and transcendance, in which two institutionalised children rise above abuse. In Steve Moran's opinion, it was something on a par with Gorecki's Fantasia for String Quartet, which he'd thought about in the same way on hearing it performed, and that "Either everything in life is rubbish or this is it, this is what life has to offer."

Once more to the arboretum, following Ms Gebbie's departure, and Mr Ghafoor treated us to the incomparable bus/sand storm scene from "Locked in Amber".

* I want to forward apologies from all concerned for the cancellation of the short story slam. The chaos was such that it wasn't possible to go ahead with it, or even to be able to accept entries. For those since reported to have been there to take part, which it was impossible to even be aware of in the throes of the fiasco, please make yourselves known at the next slam event and you will get first refusal, though you couldn't be blamed for never having anything more to do with such events. It is only to be hoped that the rest of the festival provided some compensatory amusement. Ed
Posted by wire: 1:00 pm No comments:

"Term after term is related to mining practices, such as stappil, a shaft with steps beside the coal seam, or corf-batters, boys who scraped out filthy baskets used for hauling coal to the pithead."

"Shambo is in a very healthy condition. If TB does develop in him, he can be expected to make a full recovery given appropriate care." (Skanda Vale)

How many bureaucrats does it take to kill a bull?

CAN NOTHING BE DONE?

There are only 700 of these left. Some rotten bastards are shooting them. Send the goddam SAS.

"The French, who rank first on the same list, drink more wine, smoke more cigarettes and consume more pastry than the average American. But here is the catch on that little fact: the fats they eat are real, not hydrogenated goo. The sugars they eat are real, not carcinogenic chemicals that alter brainwaves, the portions they consume are NORMAL proportions." (Monsters & Critics)

A great lesson for Sky, albeit from a dodgy demagogue.

"Anyone fancy running a railway? Because you couldn't do much worse than the gibbons who are running the London Underground at the moment." (Diamond Geezer)

Vote Boris! Though, to be fair (through gritted teeth), Livingstone did predict this fiasco. Still better complete and utter paralysis of every transport system, and Boris, than fascistic efficiency under Livingstone. Yes, vote Boris. It's time for comedy, real comedy, instead of the amateur version the present shower give us. Besides he opposed the war, and he is not an apparatchik or a bureaucrat or an iguana-loving petty dictator.

I have two young houseguests, who arrived here in London yesterday on a British Airways flight from Phoenix, Arizona and BA have misplaced the luggage for the entire flight. How is this possible?!?! When phoning their helpline, one gets either to hold on endlessly or a message that they are so busy, please try some other way. Everything is phrased to make it sound like it's the caller's fault, and that one wants to tell them about lost baggage, whereas it is they who need to tell us about it. Was there ever anything so frustrating, depressing and incompetent?

"The British Airways lost luggage farce deepened last night when it emerged that the airline is sending thousands of bags out of Heathrow to be sorted through in Milan, only for them then to be sent back to England." (Daily Mail)

Why are BA continuing to take bookings from unsuspecting airline passengers, when they know all the time that they cannot deliver the baggage? This is fraud on a blatant and massive scale. I would never book with BA in a million years, and if I book again with Aer Lingus, I want a guarantee that it's not going to be a flight shared with BA, as in the past. To learn that they and BMI are also profiteering from keeping people on hold on their telephone enquiry lines, in at least one case to an Indian call centre, just adds insult to injury (ref. Daily Mail). Ed

The bags have arrived. And they brought the missing luggage with them.
Posted by wire: 3:34 pm 1 comment:

Military solution back in favour as Rice loses out. President 'not prepared to leave conflict unresolved' (Guardian)

How can it be that these demented, pompous old windbags are allowed to create wars and massacre people around the world on a whim? Can they not be impeached?

"The entire war is an atrocity" 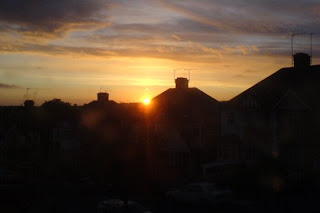 Dreaming when Dawn's Left Hand was in the Sky
I heard a Voice within the Tavern cry,
"Awake, my Little ones, and fill the Cup
"Before Life's Liquor in its Cup be dry."

And, as the Cock crew, those who stood before
The Tavern shouted--"Open then the Door!
"You know how little while we have to stay,
"And, once departed, may return no more."

Omar Khayyam, translated by Edward FitzGerald
Posted by wire: 2:26 am No comments:

Forget it, Boris. Oh, you have.

Subject to the Tories stepping aside, which is more or less in the bag, Gravitas party candidate Feargal Mooney announces intention to run for London Mayor against hated and despised, lizard-loving, gekko-faced, Chavez-arse-licking, loadsamoney-for-Yank-managers, jobsworth Ken "I'd ride a bike if I could stay sober long enough" Livingstone. Feargal promises a 50-yearly debt amnesty, back dated to 2000, abolition of all parking restrictions, complete pedestrianisation of shopping streets, free transport for all, zero emissions for all vehicles in London by 2012, dissolution of the United Kingdom and the monarchy with all their properties reverting to the people of London, abolition of council tax, and independence for London. An independent London will adopt the Euro immediately, turn the Palace of Westminster into a visitor attraction (in conjunction with the London Dungeon), keep all the overseas properties currently owned by Britain/England, including Silvio Berlusconi and Saudi Arabia, and announce an open door policy for anyone in the world who wants to come and live here. All of the royal parks will be turned into refugee camps. The monarchy will be exiled and a republic proclaimed, with Feargal Mooney occupying both the Mayoralty and Presidency for life. Apart from the original Gravitas manifesto, there will only be one new law every ten years. A one year parliament of representatives from the former local boroughs, now to be abolished, will be elected every ten years to choose the one law to be implemented. They will then be shot, ensuring that only those highly dedicated to lawmaking, and of the greatest integrity shall stand for election. (From sources close to Feargal Mooney speaking today on condition of anonymity.)

"An Israeli court today sentenced Mordechai Vanunu, who served 18 years for revealing nuclear secrets, to six months in prison for violating a ban on speaking to foreigners." (Guardian)

In fabled city at the end of the earth, a treasury of ancient manuscripts

It would be fascinating to read some translations and find out what 11th and 12th century people in Timbuktu were thinking about.

Not a very GUD review though

I would have to call this a tone-deaf sort of review, by somebody incapable of recognising beautiful artistry in the rich tapestry of Olesya Mishechkina's prose, for example. Arthur Allan's "Atlantic Drift" is a magnificent story indeed, but hardly "comic". I wish she'd said what was supposedly wrong with the editing. Anyway, you have a chance to win their review copy and find out, by commenting on the review.

Violent clowns with no argument

They have nothing to bring to an argument, they are naked in debate. Their failed dogma, their paternalistic and oppressive religions have passed their sell-by dates. All they can do is try to blow-up cars in crowded places, as if this would get them anywhere other than straight to the hell of their own making. To all practical purposes, the entire populace is united against these sorry-arsed losers. Humanity, that is what matters, not religion. Nobody gives a damn about their febrile, hysterical gibberings, only them. They need to get over themsselves, to wake up.
Posted by wire: 3:26 am No comments: