Johnny Fortycoats is only trotting after him, but he's a gas ticket all the same, yer man. 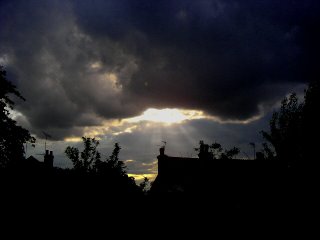 Gordon Brown can never be a satisfactory leader. A servant, yes, as Blair disingenuously dubbed him. He is a sort of Uriah Heep character. Undoubtedly gifted as an economist and apparatchik, but he has already reached the level of his competence. Maybe it's a shame, but it looks like he is doomed to remain "your good and faithful servant".

Fly with the high fields 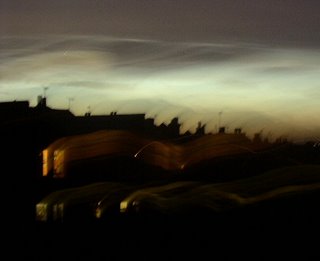 Nothing I cared, in the lamb white days, that time would take me
Up to the swallow thronged loft by the shadow of my hand,
In the moon that is always rising,
Nor that riding to sleep
I should hear him fly with the high fields
And wake to the farm forever fled from the childless land.

From: Fern Hill by Dylan Thomas

I was intrigued to find your June 2003 webpage* concerning the restoration of the ironwork on the Queens Park Estate. Though I now live in South Wales I was born on the Estate ( at 25 Barfett Street ) and am old enough to remember the railings being removed in the early days of the Second World War.

The 'Streets' were named alphabetically, as you said, starting with Alperton then Barfett, Caird, Droop, Enbrook, Farrant, Galton, Huxley, Ilbert, (there was no street beginning with the letter J), Kilravock, Lothdrop, Marne, Nutbourne, Oliphant and Peach.

Peach Street was at the Kilburn Lane end of Ilbert Street and disappeared when a 'Land Mine' landed there. The blast was so strong that windows in our house in Barfett Street, at the other end of the Estate, were blown out. Later on a large hole was dug on the north side of the bomb site, in Ilbert Street, which was filled with water and used as a reserve supply in case of fire. Although the site was walled it was a great attraction to local boys and it was claimed that a few were drowned there.

PS
There was some mention in the article of debris landing on local cinemas when the mine exploded. Perhaps they were the ABC cinema, The Palace, and the Odeon, both of which were at the southern end of Chamberlayne Road and only a short distance from Peach Street. I believe that they were at that time in the County of Middlesex and so may have been in Willesden.

London stopped at Kilburn Lane then and the pubs on the west side of the street were in Middlesex and closed earlier than the pubs on the London side. So at 10.30 pm there was a rush to cross into London for another half hour of drinking time.

Again thank you for the article which with the photos reminded me very much of my childhood in the area.

If I can be of any help to you, or other people, with information concerning the area in the war I will be very glad to do so.

* Thanks to Mr Lane for several corrections, which have now been applied to the original article. Ed
Posted by wire: 1:35 am No comments:

I told you so

There, they do exist. It's not just me seeing them. (Via)

Bomb the Sudanese airforce to smithereens

The Sudanese airforce consists of a few crappy planes and helicopters, and they're busy bombing their own people in villages every day. If ever there was a good use for military force, surely a very minimal effort would knock these aircraft out. Then maybe those bastards would start to listen to the rest of the world. They have forfeited their right to be left alone. I'm not saying invade the country, just give them a lesson in manners.

When Gyorgy Petch arrived by coach in London with just one suitcase, a notebook, and no discernible skills, and certainly no tool kit for plumbing jobs, the immigration authorities must have been tempted to advise him to get back on the bus, forget about us, and head back to the Hungarian/Slovakian border.

How amazed they would have been to have followed him into the streets outside Victoria Coach Station and witness the tumultuous scenes there. Word had already got out that Gyorgy was arriving and the streets were packed with families desperate to secure his services. His services? Some mistake surely? What services could Gyorgy Petch possibly offer anyone, least off all the families of north west London who were out in great numbers vying to outbid each other to get Gyorgy to ride home with them. After all, Gyorgy has no degree, no plumbing skills, has never picked a strawberry for financial gain in his life, has never even seen a cockle.

Well, the secret resides in that notebook which Gyorgy takes everywhere. And what is in that thar notebook. Is it gold? Oil? Not quite, but not so far off the mark either. Why, you cry, what then is in this magical notebook? Poems of course. Hundreds of them. Sonnets, sestinas, rhyming couplets, comic quatrains about the accession of Eastern European countries to the European Union. Page after page of black ink gold.

Poets, for all those who have been on Mars for the last five years, are BIG, and they are in demand, and though the world is full of them and even fuller of their verses it is undeniable that demand is outstripping supply. In a recent survey over seventy three per cent of households on Hampstead Garden Suburb were found to employ at least one poet. At least?! Yes, at least. You read it right. A staggering seventeen per cent of households on the Suburb now employ two or more poets.

Said Father Thomas McGuinness, waiting at Victoria and hoping to snaffle Gyorgy as poet-in-residence for St Edmund's in Finchley Central..."We hope that Gyorgy will look upon our offer favourably. He will have a five year contract, five weeks holiday, a non-contributory pension scheme and...

The devil you know

"The bombs in Beirut with millimetric precision? Is this crossfire? He's thinking of a western, when people would shoot from the hip and somebody would be caught in the crossfire." (Hugo Chavez)

The Anna Coluthon award (voted for by poets): Riley Dog

And finally, the Red Woodward award, and fellowship of the WRMC goes to:

A version of Vanessa Gebbie's story "Dodie's Gift", joint winner of the Willesden Herald short story prize 2006, has been published in Cadenza magazine. Follow the link above and click on "Fiction".
Posted by wire: 10:09 pm No comments:

Hanged detainee aimed to save son

"An asylum seeker who hanged himself hours before he was due to be deported took his own life to protect his son's future, an inquest jury has decided." (BBC)

Would whoever left this message please contact us with your details. [Ed]
Posted by wire: 12:30 am No comments:

Photo in the News: Rare Rhinoceros Spotted in Borneo Jungle: "The first ever photo of a male Sumatran rhinoceros in the wild"

You want cute? We have cute: Albino Pygmy Monkey Twins Born. (Unfortunately one of them didn't survive.)
Posted by wire: 10:41 pm 4 comments:

Don't say we never bring you any good news. Hundreds of brain damaged patients in vegetative states are being re-awoken with this simple sleeping pill, ironically, the treatment having been discovered by accident.
Posted by wire: 11:10 am No comments:

The age of horrorism

"But all men are not my brothers. Why? Because all women are my sisters. And the brother who denies the rights of his sister: that brother is not my brother. At the very best, he is my half-brother - by definition." (The Observer)

A long essay. It's taken me half an hour to read part 1 of 3 online. Interesting about Sayyed Qutb.

"And he sang the praises of a possible Blairite challenger, Alan Milburn, calling him 'leadership material.'" [sic]
Posted by wire: 4:57 pm No comments:

Whom the gods wish to destroy

"Maybe they have special dummy editions of the papers, produced by Alastair Campbell's gnomes in the dungeons and then brought up on silver salvers to where Tony and Cherie recline on their couches and dangle grapes into their crazy mouths." (Boris Johnson)

Funniest article in a long while.
Posted by wire: 5:09 am 4 comments:

Good, it's not only me then

"We now have enough respect for lions to be embarrassed if we see someone trying to crack whips at them and wave chairs at them. Jumping all over crocodiles is the same kind of thing." (Germaine Greer)

"Romania's Nicolae Ceaucescu did not see the end, even when the gun was pointed at him. His tipping point had come a few days earlier, when he stood on a balcony haranguing a crowd, to be met with a murmur of mockery that steadily built to a jeer. The look of irritable bewilderment on his face..." (Times Online)

Should've known when he started measuring the curtains for number 10 before he was elected that he was a mistake. Now they're measuring curtains for him.
Posted by wire: 2:04 pm No comments:

Big Brother is watching you

"[S]ince 2002 or so, the US has been accumulating and using [...e]very email. Every link, recorded. Every jot and tittle [on the internet]" (Helmintholog)

I always think that interactive television is the precursor of Orwell's spy screens, and the "spy chips in wheely bins" discovery recently only adds to the sense of intrusion and incipient coercion.

In the future if (when?) they succeed in foisting computerised identity cards on people, they will come to control all access to money, supplies and services as well as transmitting your whereabouts and behaviour to control centres. A person will be subject to immediate control by stopping his or her credit and rights through the identity card database. A tiny guided munition will be sent to seek you out and deliver a punitive, paralysing or fatal sting. All in the interest of ensuring that the Haves continue to have and the Have-nots continue not to have.

Red Woodward "A Fool to Myself" the Autobiography*

For the first time, Eddie "Red" Woodward gives the lowdown about his extraordinary life, from humble beginnings as stableboy to the Shergar kidnappers, through his tempestuous affair with Carmencita Haverty, the ex-Marxist / Opus Dei hoyden, to his death-struggle with arch business rival Muzzy "Poorboy" Pirbhai, to notoriety as secret author of the publishing sensation "Diary of a Rent Boy" (about the life of Seamus MacGowan and the Pogosticks). After the biggest ever gambling coup, which took years to clear through the courts, he went on to found the International Willesden Herald. Now for the first time he reveals the secret betting system that allowed him to predict Frankie Dettori would win all seven races in one day, and how he was driven to bankruptcy again by "semi-house-trained monkeys".

Watch out for the first instalment, "Adolf Hitler, his part in my conception", here in your super soaraway 'sden.

* In collaboration with Feargal Mooney
Posted by wire: 4:01 pm No comments:

Just prepare this story Feargal, don't post it yet. Mavis dreamed it and she is psychotic, as you know. If it happens we want to be first with the scoop. Let's take the whole front page with a picture of Tony sweating buckets, under a 300 point headline "Blair's Ceausescu Moment" and a subhead of "Blue Peter set to bump lame duck PM".

Creative Writers writing workshops' Halloween short story contest is now open. Entry is free and the prize for the winner is a year's subscription to The Paris Review plus publication for one year in the Willesden Herald.