Ritual adornment of the sacrificial building


The Willesden Library centre, home of the Brent museum, BelleVue cinema, Gigi's Café, the Willesden Bookshop, The Brent One-Stop centre, The Space I and II performance venues, The Gallery, The Gallery Concourse, the education room and other community spaces, the only town centre car park, and not least the busy upstairs and downstairs library with tables thronged with children studying, is about about to be demolished.

In the past few years, over £600,000 from the Heritage Lottery Fund was spent on it to move the museum from its former location, and other changes. Since then it has been deliberately run down and the car park made practically unusable.

The whole place was continuously booked and busy with community groups and cultural events. We even had The Divine Cat on loan from the British Museum. But fear not, in another few years you will have an office building with community areas and a private block of flats where the car park was. The piazza at the front will be consumed and the Victorian library building conjoined to the new box.

And they're also demolishing the Queensbury, opposite Willesden Green station for - you guessed! - another block of flats. They've already demolished Dollis Hill House in nearby Gladstone Park and closed six out of the twelve libraries for Brent, so the culturecide continues apace. They must spend all their time thinking, "What else can we destroy?"

This library centre is the seventh out of twelve to close but they promise it will reappear as large as ever in a couple of years. Let's wait and see. Well, we have no choice. Money has spoken. You can thank your local Labour party representatives at the next local election.
Posted by wire: 9:55 pm 7 comments:

InkFetish.co.uk - The artwork of Tom Blackwood

The high road this evening

Update: About the artists
Posted by wire: 1:16 am 1 comment:

Glenda Jackson today on the legacy of Thatcherism

This is local MP for Hampstead and Kilburn, Glenda Jackson, in the special parliamentary debate today. She speaks most eloquently and passionately about the disastrous legacy of Thatcherism. The video stops before the end of her speech.
Posted by wire: 8:22 pm No comments: 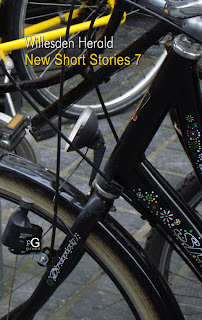 Stratos Fountoulis has once again done us proud. Here is an impression of the new cover. I think this is going to be an excellent addition to the series.

You can read the contents list and author bio's at the following link:
http://newshortstories.com/2013-new-short-stories-7

The legend that is Brent