Just prepare this story, Feargal. Don't post it yet. The Willie will be first with this scoop, even if we have to make it up. It seems that the Met have got hold of that Yankee heat ray thing and are firing it at Blair. He's decided to make a run for it. Suggest headline: "If I go down, you go down" Levy to Blair? (Don't forget the question mark.) Delete this email. Repeat: don't post this!

Chopin: The Raindrop Prelude, plus Fantasie Impromtu (you may recognise the tune of "I'm always chasing rainbows" part way through), The Revolutionary Etude (a very familiar piece) and Nocturne in E minor. Unfortunately we're not told the artist, though no doubt the cognoscienti will recognise. Excellent, whoever.

Mahler: Adagietto (from the 5th Symphony?). A crackly recording. You may remember this from Visconti's magnificent film of Thomas Mann's "Death in Venice".

Schubert: Impromptu No. 3, Orchestral version of Serenade, Death and the Maiden. Search for "Franz Schubert" to find many more links.

Enrico Caruso: L'Elisir d'Amore (mis-labelled as the next one and vice-versa), Una Furtiva Lagrima, O Figli, O Figli Miei. Vesti la Giubba ("Cloco's Theme", according to Grandad, who is looking over my shoulder—I don't know if he's winding me up) and 3 others. Libiamo, Libiamo plus Torna a Sorrento and two more.

Beniamino Gigli: Toselli Serenade and others. (Grandad looking over my shoulder says to say "the gohlden voice of Beniamino Gigli", in just that way; apparently it makes scratchy old recordings sound better when you say that, and some voices are silver and others gold and others brass. Who knew?)

If you search for Schumann, there is some lieder there. (No, no, don't say "Take me to your lieder".) Of course all of this is deplorable. No credits, no royalties. But it's there for a short while anyway and, as sins go, listening to it is perhaps one of the lesser venial ones. Check back for updates.

An evening with author Stella Duffy

"Stella Duffy has written ten novels, five of them are literary novels including State of Happiness which was long-listed listed for the Orange prize in 2004. Her other five books are the Saz Martin crime series. Stella's latest novel The Room of Lost Things will be published by Virago in 2008. She has also written over thirty short stories and eight plays. Join Stella for an evening talking about and reading from her works, there will be a chance to ask questions and she will be signing copies of her book at the end of the evening."

It's not often you get an offer like this, an evening with a brilliant woman and all the refreshments you can guzzle, gratis. Need I say more?

Billie Holiday: The Very Thought of You, I'll Be Seeing You, Strange Fruit, God Bless the Child. (Strange Fruit is one of the most solemn and unforgettable songs, could be a theme tune for Going to Meet the Man by James Baldwin. The other tracks here are also outstanding like all of Billie's recordings.)

Bessie Smith: Nobody Knows You When You're Down and Out plus Give Me a Pigfoot (one of her last recordings, when "rediscovered" by Benny Goodman etc), Backwater Blues

Charles & Eddie: Would I Lie to You? (can't get this brilliant one-hit-wonder on iTunes, but it's here on MySpace)

Francoise Hardy: J'Ai Jete Mon Coeur (just a very sweet old record found on somebody's profile, a great way to hear excellent and unusual music, singled out by each MySpace user. I'm a sucker for this sound and mood, even "All Over the World" - no link for that yet.)

Jacques Brel: Ne Me Quitte Pas, La Fanette, Les Desesperes. (I wish I could find Au Suivant and a couple of others.)

Leonard Cohen: Hey That's No Way to Say Goodbye, One of Us Cannot Be Wrong, Suzanne

I was going to post a link to The Stranger Song, but it's been removed (a hazard of this kind of bootleg access). There are several more Leonard Cohen tracks on there. Click Music, enter Leonard Cohen and click Search. You can find all sorts of things this way.

Christy Moore: Ride On (notable for the most sublime bit of slide guitar ever at the end), Don't Forget Your Shovel, Biko Drum, Delirium Tremens.

By the way, here's Christy singing Viva la Quinta Brigada on YouTube, with some interesting newsreel and fleeting pictures of some of the Irish volunteers for the International Brigade etc. "The bishops blessed the blueshirts at Dunleary".

That's Donal Lunny on the bouzouki and Declan Sinnott on the other guitar. Donal Lunny and Christy Moore were in Planxty almost at the start of the Irish folk revival. Here's Donal Lunny duelling bouzouki vs. mandolin with Andy Irvine in a great old clip of Planxty on the Late Late Show, with Liam O'Flynn on uileann pipes. (Andy forgets the words and almost doesn't restart, till Donal gives him a prompt: still brilliant/live/exciting.)

Forget YouTube, if you have broadband, get yourself a sherbet, click that link and put your feet up. It's real proper video. Some beautiful pictures, especially on "When the Deal Goes Down". I've been listening to Modern Times for a while, and though he sounds very old, it makes good listening. It's a pity they haven't got Rolling and Tumbling, The Levees Gonna Break, Nettie Moore, etc.

Quotes I like: "More frailer than the flowers / These precious hours" (When the Deal Goes Down, sounding wonderfully like some old comedian singer / George Burns / Ken Dodd / music hall act), "I've already confessed, don't need to confess again" (Thunder on the Mountain), "I'd already gone the distance, just thinking of a series of dreams" (Series of Dreams).

Message to the blogosphere: we know you're up there

George W. Bush's "State of the Union" address and the Democratic response

Willesden International Affairs
Posted by wire: 10:41 am No comments:

There was a storm

Back in London, here he is alive in black and white in his studio, hardly imagining that one day it would fly to Dublin, talking about futility and saying that art is a game. What a game, though.

Tao Lin to be published by Melville House

"Sasquatch", which was short-listed for the 2006 Willesden Herald short story competition, will be included in Tao Lin's collection "Bed" to be published by Melville House this April. (More)

Look We Have Coming to Dover!

The bard of Dollis Hill

"[Daljit] Nagra is that rare thing: an unknown poet whose debut collection is being published by Faber, Britain's leading poetry house. [...] When he performs poems such as Singh Song!, he says he tends to read them with 'an Indian voice, black it up, minstrelise it'." (Guardian Books)

This opens a new world of possibilities for poetry. I wouldn't mind going into the poetry biz, myself. How does this grab you?: "The Willesden Poetry Minstrels". With a few high-kicking soubrettes and a troupe of lads done up in burnt cork, we could go touring the provinces, knocking people dead every night with a medley of "Four Quartets" and "Rockabye Your Baby to a Dixie Melody". It will be the new Riverdance. We'll close on an arrangement of Gray's "Elegy in a Country Churchyard" in an up-tempo, semi-rap style, segueing into Kipling's "If" and finally bring the house down with "The Swanee River". All for the price of a few banjoes.

Red Woodward
Posted by wire: 10:48 am No comments: 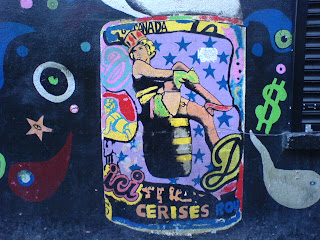 What need you, being come to sense 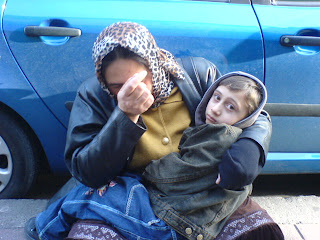 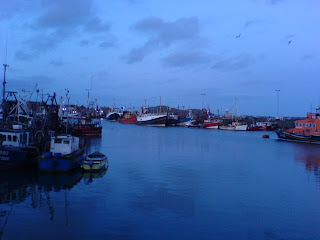 Read Kid in a Well by Willie Davis

Newsdesk
Posted by wire: 2:07 am No comments: 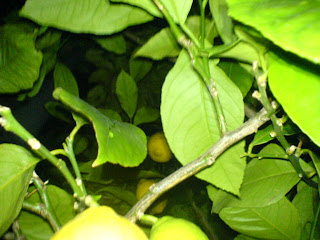 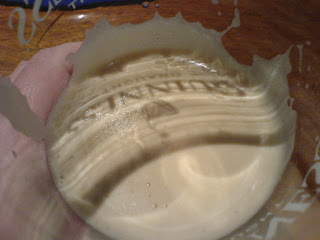 I see an addlepated debauchee. I'm getting early promise not fulfilled. I'm sensing bloated flesh and pomposity. It's not Ken Russell, is it?

Amazing scene as a lion hugs his rescuer. She rescued him from a travelling circus.
Posted by wire: 11:32 am No comments:

"In an interview with the Nuneaton Telegraph in 1999, she said: 'I love my writing - like God, I start with nothing and create something."

And the winner of the Willesden short story prize 2007, as chosen by Zadie Smith, is "Kid in a Well" by Willie Davis.

Willie Davis is a native of Whitesburg, Kentucky who currently teaches English at The University of Maryland. "Kid in a Well" is a chapter from The Darktown Strut, his recently completed novel about contemporary Appalachian life.

Many thanks to everyone who took part and to formerly famous poet Rockwell "Rocky" Rollins and WH media correspondent Amanda Saxonheart for hazarding their eyesight over the strange fonts submitted. Thanks to Zadie Smith for adjudicating.

"Amongst many high concept competitors, 'Kid in a Well' stood out for me for its relative simplicity, neat characterisation, and laconic, relaxed structure. It's a story genuinely interested in its characters rather than fascinated with its own form, and offers the reader humour over authorial hubris. I really enjoyed it. Congratulations, Willie, and enjoy your mug! I have one and I love it." Zadie Smith

The forthcoming anthology "New Short Stories 1" (Pretend Genius, 2007) will feature the winning story together with all but one of the short list and a selection of other stories commended by the editorial team, including (confirmed):

It will also feature more of the virtuosic series Microworld by 19-year-old Olesya Mishechkina, from which "Charles Magezi-Akiiki" is taken.

There are unconfirmed reports that white smoke has been seen coming from the special chimney above Willesden Herald house. More to follow.

The short-listed writers have been notified by email. Full details to be announced.

Ask yourself: Who am I? Invariably the internal answer will be autobiographical - an identity based on the past. It will be a description of a continuity from childhood through adolescence to adulthood which is all past memories and no longer exists. Memory is the mirror and we live on the wrong side. Seldom will anyone answer the question of Who am I? with: I appear to be the process of reading this page. (Yatri) 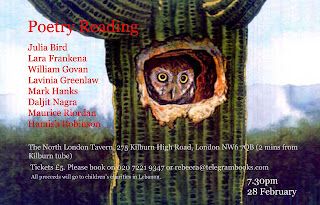 A hole-and-corner judicial murder, indistinguishable from those committed by Saddam himself. It might just as well have been Bush, Rumsfeld, Cheney and Blair in hoods and leather jackets, conducting this act of squalor and barbarity. Make your own cartoons.