One of the most horrifying videos since Vietnam

A group of IDF soldiers stand up a blindfolded Palestinian man and shoot him at point blank range in the foot. He was a demonstrator, previously detained for hours blindfolded in the blazing sun on the road. This is just one of the horrific scenes. This is the glorious beacon of democracy, shining example to the world, where democracy equals torture, expropriation, ethnic cleansing, apartheid, invasions, and nuclear weapons.

"...it is the troops not the settlers. It is not just a 'rotten apple' which is usually the response that we get from the government spokespeople. We didn't give out 100 video cameras to document rotten apples. It was to show there was something systematic happening and it was structural to the occupation."

Alzheimer’s sufferers given hope by new generation of drugs - Telegraph

Alzheimer’s sufferers given hope by new generation of drugs - Telegraph

"Millions of Alzheimer’s sufferers have been given fresh hope after a new generation of drugs were shown to reverse the symptoms of the disease."

This is fantastic news. If this is true, it's probably the best news in our lifetime. Well done researchers at Aberdeen University. Can we please hurry up the testing of this somehow? What could be worse than to be one of the people who falls victim in the next four years just too late for the new treatment?

Are we saying "Let them eat mud cakes"?

Why can't we implement school dinners for every school in the world, and support every child to go to school, as promoted by George McGovern? Let's implement this directly. Why are people obsessed with their stupid territorial claims, religious delusions and war of every kind? It's time for world government.

Welcome to about 400 people since midday who have arrived curious about the fact that the competition pages are written in Delphi for PHP with MySQL. If that's all g(r)eek to you, you're probably not a geek, or else you're a geek with a different specialism. I'm well impressed with the pulling power of a blog post by Codegear's Nick Hodges.

p.s. And to the person who just arrived searching for "how to run a short story contest", all I can say is God love you. Ossian
Posted by wire: 10:56 pm No comments:

Do you love bouzouki?

The opening date will be September 1st and the closing date December 19th, 2008. You can go to the competition pages and register now to receive newsletters and updates. Entry this year is online only, postal entries are excluded. Please see the competiton pages for full details of rules, judge, prizes etc. 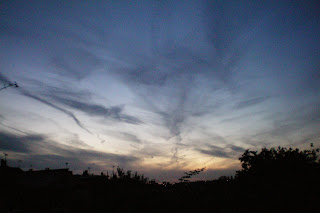 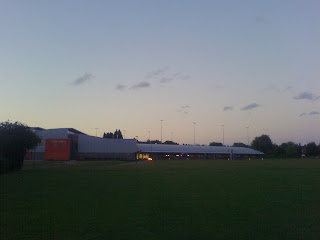 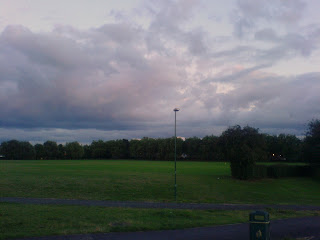 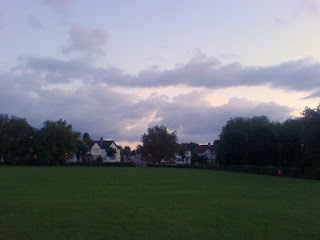 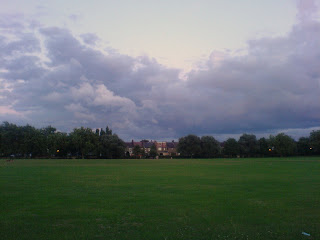 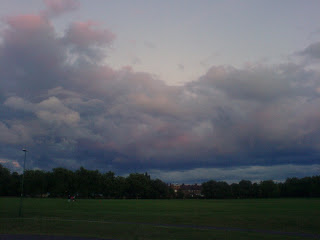 Sphagnum
Posted by wire: 3:16 am No comments:

Poems on the underground

If you've ever liked some of the poems that fill empty advertising spaces on tube trains, you might be glad of this online collection of them. Pity the first one is a broken link, but the others I tried worked.

Tramp the dirt down

I don't agree, but I feel some sympathy for Elvis Costello. The song is a cry of pain, really. I certainly have no sympathy for that awful woman and her tuppence-ha'penny philosophy of the huxter. But when she dies she becomes human, together with Saddam, Galtieri, Hitler, Bin Laden and all wrong-headed fanatics. Even Blair will be raised to humanity by death. 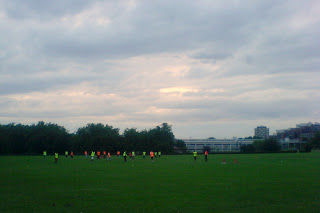 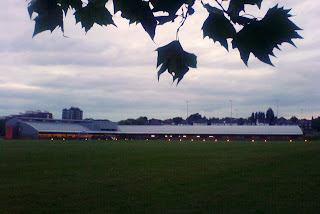 Hopscotch
Posted by wire: 1:15 am No comments: 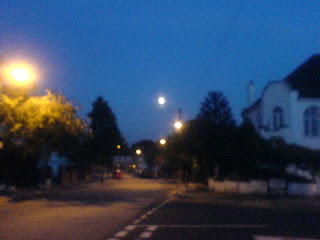 "The first footage showing an interrogation at Guantánamo Bay was released today by the lawyers of Omar Khadr, a Canadian teenager detained by US forces."

This is obscene. We should be ashamed to be associated with this disgusting regime. 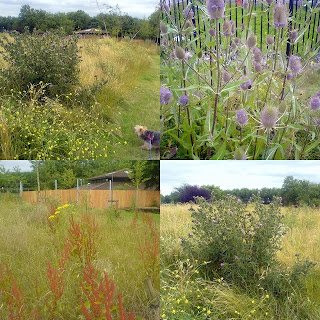 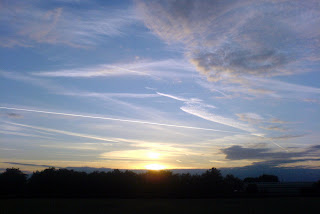 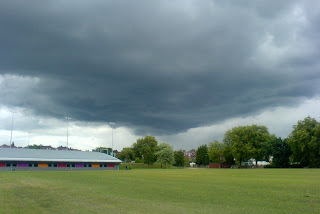 The child in time

Ian McEwan on his family's astonishing story and the brother he never knew he had | Extracts | guardian.co.uk Books

Fascinating, the basis for some of the subjects and concerns that run through Ian McEwan's fiction, in a straightforward summary.

"14 months in the making, 42 countries, and a cast of thousands. Thanks to everyone who danced with me." (Matt Harding)

If Carlsberg Willesden Herald made travel videos... 4.7 million views and counting. Click here and then High Quality for, yes, higher quality (much higher).

Norris, old sport, I was fulfilling my civic duty at Centre Court - Telegraph

"Of course I was on the side of Federer, especially since his opponent had a peculiar habit of bending forward before every point and tugging from behind at the gusset of his shorts. It was very rum indeed." (Boris Johnson)

Yes, afterwards many wanted to congratulate the new champion but few wanted to shake his hand. He had at least that much in common with the author of Portnoy's Complaint.

Why do the organisers allow these abominations now anyway - surely Nadal should have been fined and warned for shorts abuse? Only a few years ago, nobody but Monica Seles had any trouble playing tennis without roaring like rutting bull elephants, now every point is accompanied by sounds that would drown out the Mormon Tabernacle choir in full Hallelujah. The same goes for billionaire, diamond-earringed footballers gobbing great gouts of phlegm at every turn. It's unnecessary, disgusting and a show of contempt, just as when a passerby spits at your feet.

Acclaimed author Rana Dasgupta has kindly agreed to choose the winning story from a short list of ten in the forthcoming Willesden Herald short story competition. Rana takes over this year from three times judge, Zadie Smith. We will all miss Zadie, but I am delighted to have Rana to help out this year. It's all for the love of the short story, as ever.

Tokyo Cancelled by Rana Dasgupta, "a thirteen-part story cycle, was published in 2005 to widespread acclaim and has been translated into nine languages". 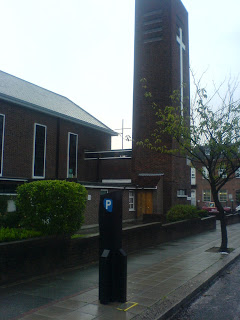 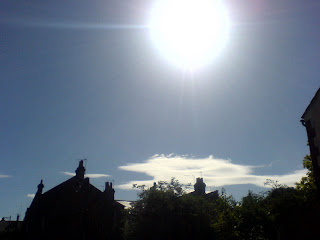 Plan for a cartoon

Tarantino, feet up, watching Kill Bill on a screen, in which Uma Thurman poses with samurai sword. Through the windows and patio doors in the background, a horde of living-dead child stab victims approaches, with the knives, hatchets and machetes still embedded, arms outstretched and starting to come through the walls...

Latin to be heard at all Masses?

"Oh good grief - not this again! the 'all' used in the english vernacular translation is not congruent or compatible with 'omnis' which is axiomatically an inclusive non-conditional universal. The 'all' used is an exclusive conditional 'sub-universal' ..." (Commenter on Telegraph blog)

Now, this is the sort of thing more newspapers should be printing. Not that I follow it in its entirety, but it strikes me as very edifying. I never agreed with changing the Mass to English. At the time, they went and left in the only bit of Latin I never understood: Kyrie eleison.

John Pilger: From journalistic triumph to torture for a young Palestinian | Comment is free | The Guardian

"A man stood over his luggage, picking through his documents. "Where's the money?" he demanded. Mohammed produced some US dollars. "Where is the English pound you have?"

"I realised," said Mohammed, "he was after the award stipend for the Martha Gellhorn prize. I told him I didn't have it with me. 'You are lying', he said. I was now surrounded by eight Shin Bet officers, all armed. The man called Avi ordered me to take off my clothes. I had already been through an x-ray machine. I stripped down to my underwear and was told to take off everything. When I refused, Avi put his hand on his gun. I began to cry: 'Why are you treating me this way? I am a human being.' He said, 'This is nothing compared with what you will see now.' He took his gun out, pressing it to my head and with his full body weight pinning me on my side, he forcibly removed my underwear. He then made me do a concocted sort of dance. Another man, who was laughing, said, 'Why are you bringing perfumes?' I replied, 'They are gifts for the people I love'. He said, 'Oh, do you have love in your culture?'

"As they ridiculed me, they took delight most in mocking letters I had received from readers in England. I had now been without food and water and the toilet for 12 hours, and having been made to stand, my legs buckled. I vomited and passed out. All I remember is one of them gouging, scraping and clawing with his nails at the tender flesh beneath my eyes. He scooped my head and dug his fingers in near the auditory nerves between my head and eardrum. The pain became sharper as he dug in two fingers at a time. Another man had his combat boot on my neck, pressing into the hard floor. I lay there for over an hour. The room became a menagerie of pain, sound and terror."

While Mohammed was receiving his prize in London, the new Israeli ambassador to Britain, Ron Proser, was publicly complaining that many Britons no longer appreciated the uniqueness of Israel's democracy. Perhaps they do now. (via)

Bush and Cheney approve of this sort of thing, and Brown, Blair and Straw didn't seem to notice anything. Give them all the boot. Is it any wonder we have an uprising? "They want you to like them. But are they the kind of people liberal Anglicans will be able to have a nice cup of tea with?"

Headline of the year to date. Beat that Red Woodward.