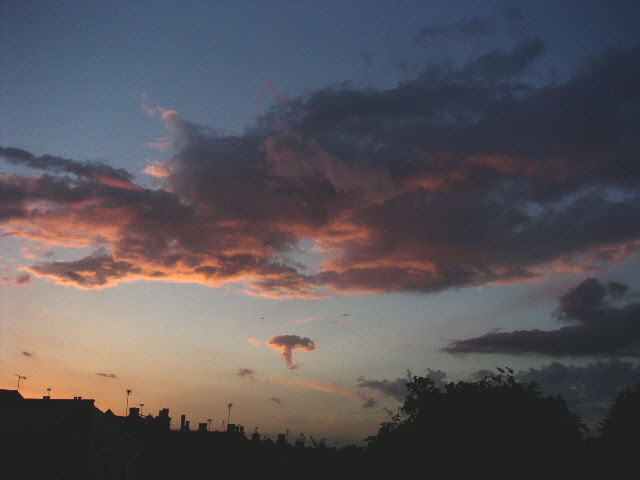 *Are you out there Ossian? Can you contact me. Ed.

Dept of the Blindingly Obvious
Posted by wire: 10:58 pm 1 comment: 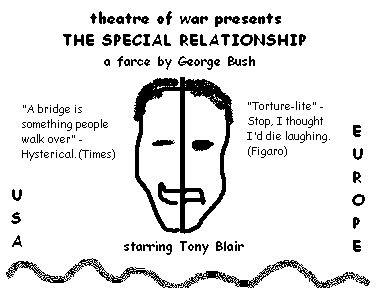 From the same team that brought you the hilarious "Friendly Fire"

for how to drive bureacrats to extinction

With every damn letter that Brent Council sends to Herald House, they include a set of brochures that probably cost about £2.50 to produce. The most boring bureacratic piffle is accompanied by these weighty tautologies. It's bad enough having to recycle their blasted rubbish for them, but they have the effrontery to conduct this arrant wastage in the process of demanding more and more money from us. Who will rid us of these doltish parasites?

Don't miss this, if you can stand a little New York apartment envy. Interesting observation about the Diamond Sutra too, apparently printed in China 600 years before Gutenberg's Bible.

"Investigate this" - and they smashed his head in

Guardian Unlimited | Special reports | 'I will always hate you people'

The US military claimed in the note that Dr Izmerly, a distinguished chemistry professor arrested after US tanks encircled his villa, had died of "brainstem compression"

When democrats attack, "at least there's always an investigation."

It was due to loose earth on the track. Not loose enough.

Likud's mascot is made homeless

I forget, did God give Gaza to Moses? 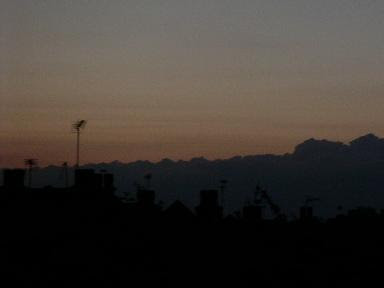 There were very dark clouds on the northern horizon this evening.

Willesden Meteorillogical Station
Posted by wire: 1:47 am No comments:

For the first time this year, a new category will be introduced for "World's most Boring and Pointless Newspaper." First on the list of nominees is: Computer Weekly.

Look at the picture.*

*The Guardian has just been named Newspaper of the Year at the prestigious Picture Editors' Awards. More
Posted by wire: 10:48 pm No comments:

Email ThisBlogThis!Share to TwitterShare to FacebookShare to Pinterest
Duck and Cover

Ready.gov - From the U.S. Department of Homeland Security

What to do when their gamble is lost, and your life is ruined.

Warren Turr
Posted by wire: 1:12 am No comments:

We apologize to our readers for publishing a picture of Bush and Blair on location for their new movie, a remake of Midnight Express. We were the victims of a malicious satirist.

Effective forthwith, I have decided to strip Feargal Mooney of his title "Acting Editor." From now on he will have to take his chances as a freelance.

I will come out of retirement temporarily, till a replacement can be found.

Then again some of these "War War War" pictures can be quite "Educational Educational Educational," don't you think? To be fair to the government, they did promise before the last election that their three priorities would be "Education, Education & Education," and it must be triply educational for our children to see the pictures from Iraq all over the TV, the Internet and the Newspapers. They might as well learn about the sadistic and perverted world that we have prepared for them, all about the depths of human degradation, and thirdly about impunity and self-satisfaction. A cabinet insider told me as much, off the record, and she added that our small children have to learn to deal with all of these issues - instead of just pfaffing around building sandcastles and so on - if the rate of increase in the suicide rate is to be reduced "in real terms." (Note to myself: Margaret can sound quite plausible at times.) Ed
Posted by wire: 2:50 pm 1 comment:

The garden ignoramus - an occasional series

A blessing from Father Arroyo for anybody who can identify these flowers spotted in the woodlands around Herald House.*

Sponsored by Mrs Haverty Global Enterprises (UK) Ltd. All rights reserved. This means you! Copyright © 2004. Registered with notaries public on all continents, recognized and protected by all signatories to the Berne Convention. The moral right of Mrs Haverty to be identified as the sponsor of this exclusive promotion has been asserted in accordance with the Designs and Patents Act, as amended. Any person who carries out any illegal act in connection with this promotion shall be subject to summary execution.

*The first four were snapped this week. The last two are reprinted from last summer. Ed.

How do people find standards at Willesden Sports Centre?

A review of The London Silence by Stephen Moran :: The Compulsive Reader :: A Haven for Book Lovers

Interesting to hear from somebody who just sees it as a book, and has no connection with me. I've never thought of the book in the way that Bob Williams describes it, but his comments are fair enough. I would argue that Joseph is more than a loser (if I could think of anything to back that up.) Perhaps this will spur me to write a sequel.

With apologies to readers on low-bandwidth connections...

If dogs can only see in monochrome, why do they have such wonderfully variegated coats? Ed.
Update July 2013: A recent experiment proved that dogs can differentiate colours.
Posted by wire: 11:30 pm

Write This appears to be having a nervous breakdown.