* Thanks to Alison Hopkins for identifying some of the mystery flowers. Ed.
Posted by wire: 10:49 pm No comments:

Emma Martin of New Zealand has won the Commonwealth short story prize for the Pacific region with her story "Two Girls in a Boat". Emma's story "Victor" was included in Willesden Herald: New Short Stories 5.

Somewhere Else, or Even Here, a short story collection by A.J. Ashworth, has been short-listed for the Edge Hill prize. A.J's story "Overnight Miracles" was also included in New Short Stories 5.

I can see that this will need regular updates as the scene changes very much from day to day. Here are a few new snaps from today, Tuesday May 29th. I'm not happy with the picture quality, so I might try my trusty old Minolta next time.

This is just a detail. Click to see the complete scrollable map.
Posted by wire: 10:53 am No comments:

Thieves in the night


This morning between 2 and 3am Richard Barrett, Brent's Property Officer, raided and stripped our library.
About 15 workers took the books from the library and also took the murals painted in the 1930's specifically for the library along with all the plaques commemorating the library's opening by Mark Twain.

They took tables and chairs and other assorted objects including a microwave and a box of sticky tape.

They were assisted in this action by about 12 police officers.

In a meeting with campaigners last week the new leader of the council Mohammad Butt promised that the murals and furniture would not be taken.

We asked him to hold off stripping the library until he had organised a meeting with All Souls College, the council and ourselves.

This action this morning is proof that the council had no intention of trying to ensure that the reverter on the library had not been triggered.

Cllr Mo Butt said he wanted to listen to the community, engage with them.

This is how he listens. By taking this action he has jeopardised the ability of this community to run this library.

We may be finished with Brent council but our campaign continues. We will not let their cowardly, middle of the night plundering defeat us.
Cllr Butt's words to us are worse than meaningless.
They reveal what a cowardly, conniving, bunch of dishonest panhandlers they are, but what else would you expect in the Banana Republic of Brent?

You may want to email Cllr Mo Butt at Brent Council and tell him what you think. cllr.muhammed.butt@brent.gov.uk *

* Also let him know what you think on Twitter, where he lurks under the moniker @lwxmb19. Not that they care at all, but they will go down in the annals of shame for their destruction of the libraries of Willesden and Brent. What Willesden could afford at the time of Queen Victoria's diamond jubilee in 1900, "it cannot afford" at the time of the present monarch's jubilee in 2012. What was created by the generosity of previous generations has been destroyed by the stupidity of a few reckless councillors. But make no mistake, it's not that they cannot afford it, they are spending £650,000 (yes, oh mateys! who will get the contract?) on repainting Kilburn library. They just don't want us to have local libraries, they don't want study space for local kids, all they want is more flats because that is how they get more money. And that is all they care about. (Ed.)
Posted by wire: 10:05 am No comments:


See also: Wildflowers of Willesden meadow 1
Posted by wire: 1:26 am No comments: 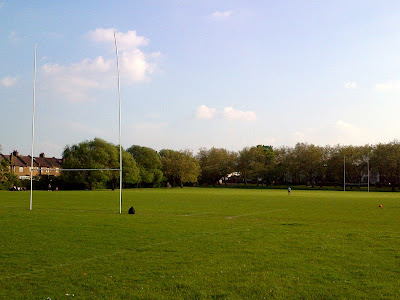 It's that time of year when the soccer posts are removed and the tall posts installed in King Edward VII playing fields. So if you want to play rugby, Australian rules, American football, Gaelic football, hurling or what have you, there's your chance.
Posted by wire: 8:29 pm No comments:

Wildflowers of Willesden streets and gardens

* From A. Sherlock: "I think the little yellow one with russet leaves, 26 May, is an oxalis, possibly creeping red woodsorrel. The unknown front garden of 23 May looks like a bit like a white valerian."

The wild meadow area behind the Willesden sports centre, which was mowed at the end of last summer, started to grow back a few weeks ago. With the help of Wildflowers of Ireland (I know, this is not Ireland but it's a great book), I have tried to identify some of the wildflowers. Most of the pictures have more than one plant in them as the meadow is very luxuriant but you can assume that I'm referring to the ones with flowers. (O.G.)