With 38 days till the closing date, there is still all to play for. To date we have had just 63 stories submitted and I'm eight behind in the reading, looking at two tentative yeses, and a small number of maybes. At this grade of ore, we will need about 300 entries to get 10 yeses for the short list.

By the way with the profit-sharing system, when we go over 150 - break even point - all subsequent entry fee income will be split equally among the ten short-listed. As we only get £4 per entry after Submittable commission, that would produce a prize fund of £600.

If you're wondering what the first 150 entry fees are used for, the answer is for publishing the book, author copies, and the results event. If there's anything left over we'll chuck it into the prize fund as well.

All details and how to enter: www.newshortstories.com
Posted by wire: 1:06 pm No comments:

Can you help trace the Willesden Morozoff family?

Can you help me find the mystery lady in the photograph? This is the story: 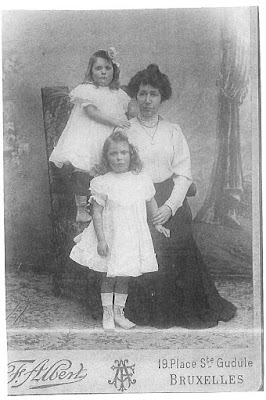 My great aunt died in childbirth with Emily Elizabeth. After that the father moved to l, Brenthurst Road, Willesden and had the children baptized in St.Marys Church Willesden.- they were there but

They moved to Belgium in 1904. Later 3 of the children came back here; they were John, Vera Maria and Henry Frank and I am in contact with this part of the family. However  we don't know what happened to the other 3 children: Leslie Paul, Pauline and Emily Elizabeth.

I have been in touch with the Belgium archives and I was very fortunate that they had the Morozoff file. As they were foreigners in the land they had to inform the authorities when they moved address. So I know that Pauline was leaving Ixelles in Belgium in 1926, unfortunately don't know where to.

The photograph I have is in 1904 in Belgium. But apparently this woman figured in the family when in Willesden. She would have descendants somewhere and if recognized may be a stepping stone to finding where the rest of the family went. I have done work on the Ancestry Search engine and have trawled all the passenger lists and cannot find any of these Morozoffs so have hit a brick wall at the moment.

If you have any info. for Kathy, please contact kathleenpjones at  live.co.uk. Ed.
Posted by wire: 7:11 pm No comments:

A literary agent to read our winning stories

We are delighted to announce that agent Carrie Kania of literary agency Conville & Walsh has kindly agreed to read the ten winning stories this year. Here is a link to Carrie's profile. Among her many credits, she launched an imprint that racked up 13 New York Times bestsellers. She also works for leading writers in the short story world, including Simon Van Booy, who won the Frank O’Connor award in 2009 for his collection of stories Love Begins in Winter, and Paul McVeigh. So once again, please send us your best short stories. Each one will be carefully read and considered. Thanks. (Ed.)
Posted by wire: 3:47 pm No comments: