You break our laws, and we'll break yours

The three unwise monkeys are in charge of British foreign policy. See no torture, hear no torture, speak no torture. Blair, Brown and Straw. Robin Cook is turning in his grave.

Look what I got for Christmas

did ye think i was dead?

"In the 1989 “Anthology of Contemporary Bosnian Poetry,” Muhamed D. was represented with four poems. My copy of the anthology disappeared during the war, and ..."

Marvellous short story, about poetry, Bosnia, America, abandoning pretentions and finding humanity. And what would a bit of East European storytelling be without a dollop of the kind of diversion that leans heavily on the "all is fair" principle, stirred in for flavour.

The night before the morning after.
Posted by wire: 6:40 pm No comments:

"Chinese authorities announced a cleanup -- of sorts. Instead of being clubbed to death the animals are electrocuted with home made devices wired to tractor batteries. They struggle to escape as one prong goes in their mouth the other in their anus, then lie twitching and whimpering on the ground. Often the voltage isn't strong enough. There is no effort to check they are dead before they are strung up on the tractor and skinned. In the back of the vehicle their skinless bodies pile up, some clearly still alive, their hearts still beating."
Posted by wire: 6:38 pm 9 comments:

Including reviews of winning and short-listed books from the Raymond Williams award for community publishing, and a lot more.

Only a week left to get your stories in for the Willesden short story prize. See below for details. About a hundred have been received so far, and our hired wordslinger (motto "Have pen crayon, will travel") reports that the standard is high.
Posted by wire: 12:34 am No comments:

Extract from a Willesden diary

I'm a born again nutter, thankfully I'm a self-medicated born again nutter (speed and weed are all I need). God forbid I were not. Have you ever tried, say just 20 mg. of chlorpromazine, Largactil, better known in prison as the liquid cosh? If you have, you will know what it feels like to be a zombie.

Enough already, I don't want to get anyone down, for I am, as per usual on an up. I have had a wonderful year, notwithstanding the fact it had a rather ominous beginning, when I lost £4,000 in a little business venture that went wrong. Anyway I've since stopped gambling again. It's easy to stop, I've done it hundreds of times.

So that was back in April and as I had whole lot of magic mushroom tea I was higher than the proverbial kite. How high is high?

I started going back to the writers group again, where I was encouraged to tackle writing my book again, which I am happy to report I started at the beginning of June and finished three months later.

Anyway I had a lovely diversion, in the middle of writing said book, when I met the most gorgeous girl and managed to get my end away, for the first time in a long, long while. It was really very funny, however as she became part of my story, I'll give you the shortened version.

What was funny to start with was, for the longest time, I had been looking for someone to share my magic mushroom tea with and when I met this girl in the Spotted Dog pub, she only tells me she's the magic mushroom Queen. I resisted telling her I was the King. However I did manage to give her my phone number, telling her she could give me a ring sometime and come up and see me.

I never had much hope for such an event, as she was only 27, with a body to die for and I'm old enough to know better. So you could have knocked me down with a feather, when she called me that same night and indeed came up to see me.

Now I have been married five times and I took my fun where I found it, however I had never been with the perfect body, that was Ashlie (her assumed name).

She told me she was a stripper by profession and a nymphomaniac. I told her I was Jesus and she could nympo maniac with me whenever she felt like it.

She stayed with me for the next two nights, with me never getting off first base. We had a good time, she enjoyed the tea, the smoke and the company and I was living in hope. She disappeared over the weekend, turning up again on the Monday, staying on till the Wednesday, with still nothing going on but the rent.

Now there's an old cliche that says, if you can make them laugh, you can fuck them. Well watch the ride. I'm telling Ashlie about Marilyn Monroe in the film "Some Like It Hot" with Jack Lemmon, and Marilyn's saying to Jack how she would love to just talk to him all night and Jack Lemmon's making all kinds of faces that are saying he wanted to do anything but talk. So now I'm saying to Ashlie, forget the one about the bishop and the actress, fuck Jack Lemmon and Marilyn Monroe, this is Jesus Christ Almighty and the fucking stripper and all we're doing is talking. Talk about laugh, I had never laughed like this, since I was knee-high to a grasshopper, and Ashlie was even worse and it went on and on, like Ariston. Ashlie was so bad I sent her into the next room for the night.

We never slept much that night and she was still laughing the next day. So I took her for a walk in the park and left her there, to laugh it off, for I sure needed a break.

She followed me home about two hours later. I had sort of made up my mind to ask her to leave because I wanted her so much it hurt. However she asked if she could have a bath and I asked her if she would like a nice cup of tea. Shit she had only been there a week and we had got through 32 pints of magic mushroom tea, for this was the last of it. So I took her her cup of tea and she just lay there, so gorgeous and fuckable. Believe me I was foaming at the mouth and hot to trot.

The next thing I know, she's out the bath wearing a G-string and a really sexy bra and telling me I could have her!

Well you'll have to refer to the book for what happened next. Suffice to say I never had to ask her if it was all right for her...

*Thomas is a Willesden-based Scottish writer.
Posted by wire: 11:36 pm No comments:

Amaptocare is a major public arts project by Jochen Gerz. If you sponsor a tree, you choose the species, which determines the price. A small lectern beside it will be engraved with your answer to the question, "If this tree could talk, what should it say for you?" Jochen has spoken to over 300 out of 600 of the donors already, mostly in person. As I'm not in Dublin, he phoned me last week at an appointed time to discuss the text to go beside the wild cherry tree that I chose. I told him I lived in Ballymun till I was 23, but I wasn't sure what was required, that it was too easy to philosophize. He said that what he was looking for was something personal, rather than general. I wasn't able to answer there and then, though I had thought a lot about it. In the end, this is what I emailed, and this is what will go beside my tree:

"I heard the cranes on tracks singing to progress when they built their concrete house of cards. A hollow evicted became a hill. Cubitt Haden & Sisk raised seven giant mausoleums to seven system-built heroes. Spiral arms gerrymandered out across constituencies. Refugees fell in from the tumbling city. Now where hundred-foot lighting masts used to sway, the hill has been righted back to earth. Where only the odd sapling pined, a forest advances from Santry woods south. Listen to the singing of blackbird and robin in the branches now, and circling above in their changeless Dublin accent, the seagulls still crying, still laughing."

Listen to all those future Feargal Mooney's commenting on the demolition. One of them says, 'It's too good.'
Posted by wire: 12:23 am No comments:

Portrait of the artist 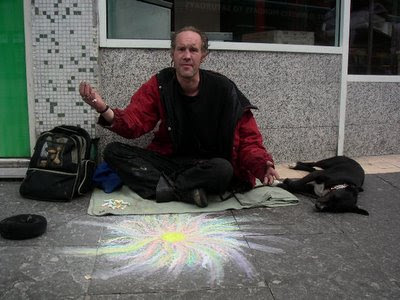 It falls to me to introduce some order into the proceedings here. Frankly the fumes of whiskey around Herald house are nothing but unprofessional. And I don't care if Feargal calls that "telling tales out of school." What am I, a man or a mouse?

You asked: Send as attachment or in the body of an email? Answer: Attachment (".doc", ".rtf" or ".txt"). If there's any problem with the format, we'll let you know. Do not put your name with the text of the story, but please do put it in your email.

You asked: What if I've developed the story in a workshop or online workshop, does that count as published? Answer: No. But if it's online in a blog or online magazine, that counts as published - so get it off there or don't send it. We're not the F.B.I.

You asked: How will it work? Answer: The entries will be reduced to a shortlist with the aid of this person, a sort of literary odd-job-man. Shortlisted stories will then be sent to the adjudicator without the authors' names, so everyone will have an equal chance.

You asked: How come I can't see the mugs anymore? Answer: The shop was burgled and we had to create new mugs, so the old links don't work anymore. The links have been updated below.

You asked: What the hell are you talking about? Answer: Stop asking questions and get writing.

Poets reading their own work

A significant new online museum of contemporary and historic recordings, "the world's premier online collection of recordings of poets reading their work." There is an introduction on video, and a guided tour by Andrew Motion.