Blue Bishops were superb, sounding very much like the desperately missed Rory Gallagher and his band. Here's a snippet of them playing Hoochy Coochy Man (1.19mb) by Muddy Waters. They were superb. 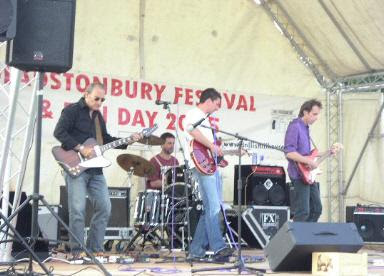 If your bandwidth [and ours -Ed] can stand it, by the power of wireless telegraphy we even have this moving picture presentation:

The Willesden Herald - first with the blues

The lady in the lake 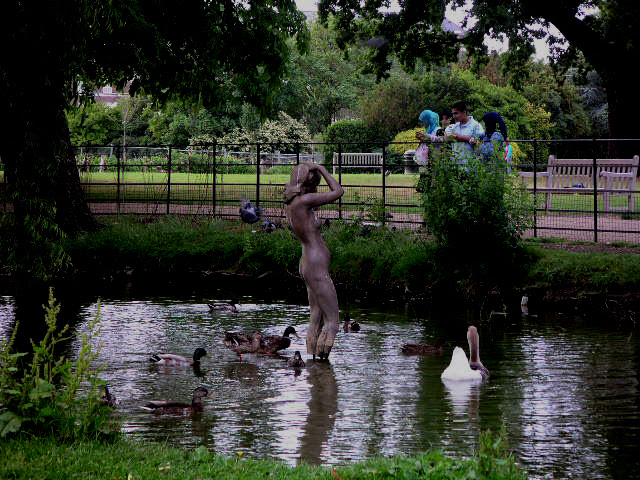 It's a pond actually, another one of the many delights in Brent's biggest park, and Willesden's pride and joy, Gladstone Park. There is also a nature / wildlife reserve, and a good view from the hillside over to Willesden Herald House on the southern slope of the valley.
Posted by wire: 10:37 pm No comments:

The five figures of Memorial to Prisoners of War and Concentration Camp Victims have stood in the Dollis Hill park since they were presented to Brent Council in 1971 by sculptor Fred Kormis. But on Christmas Eve [2003] the sculpture was attacked by vandals, who decapitated four of the five figures.

The moving sculpture has now been entirely restored and stands proudly once again in the north west of the park, next to the car park--a spot chosen by Mr Kormis himself.

Background on the artist

Fritz Kormis (1987-1988) was born in Frankfurt and served in the Austro-Hungarian army in the First World War. He was held in a Siberia war camp from 1915 to 1920--his experiences there informed the memorial we see today in Gladstone Park.

When Hitler came to power, Nazi laws banned the Jewish sculptor from working and he so he fled first to Holland, then to England in 1934, where he adopted the name Fred.

After the horrors of the concentrations camps in the Second World War, he formed the idea in the 1960s of creating a memorial to prisoners of war and concentration camp victims to be erected in central London.

A site was never found, but his friend and the then-leader of Willesden Borough Council Councillor Reg Freeson suggested it would find a welcome home in the borough.

At the unveiling ceremony in 1971, Mr Kormis described the sequence of figures. He said: "They are a five-chapter novel, each chapter describing a successive state of mind of internment: stupor after going into captivity; longing for freedom; fighting against gloom; hope lost; and hope again.

"Unison, Britain's biggest union with 1.3 million members, used its annual conference to attack the proposals in a move likely to set alarm bells ringing in government."

You will need a permit from the government to exist

Nobody who doesn't want to be tagged like livestock, nobody who doesn't want to be beholding to whatever government is elected for permission to exist, nobody who considers himself or herself born free in a land that's their own, nobody at all should vote for Labour. They have promised to take steps within a month after the election to introduce an Identity card law. You would be charged about £40* for a permit to exist, without which you would be excluded from all rights - such as are not yet abolished - and without which you would lose your birthright as a native of your own land. Once you are corralled into acquiring an identity card you will be effectively stamped on the wrist, and under the complete control of whatever lying cadre of sheisters have managed to manipulate public ignorance to achieve power. And don't be so naive as to imagine they will not abuse their power, it won't be very long after they tag you that they move to reduce your freedom still more, till you are at the mercy of the bureaucracy in what will be nothing but an open prison, or rather a farm.

*They are now saying £93 per head, and independent estimates calculate the cost as nearer £300, even supposing they can employ enough people to waste enough of our time to prosecute the tagging scheme.
Posted by wire: 1:32 pm No comments:

Discovery of a fourth complete poem by Sappho

"Written more than 2,600 years ago, the 101 words of verse deal with a theme timeless in both art and soap operas; the stirrings of an ageing body towards the nimbleness, youth and love it once knew."

"A gull's feather falls out of the sky towards them like a toy propeller, black and grey and white, impossibly slowly."

I started making notes about the view on the 9:25 p.m. (Tuesday) train from Cardiff to London, Paddington. I sat facing in the direction the train was going.

A wig of cloud on the mountain head
A cloud embryo in the belly of the horizon
A goldscape cave and coral clawscrape
Shockhaired fogey in a tunneled blackout
[illegible] of [?] striplight switchback [?] [illegible]

Then we were diverted after some station, and the train sped backwards the way it came, and I saw the same things again. Weird.

I'd worked late after Sunday midnight, caught the 7:45 a.m. train from Paddington to Cardiff on Monday morning, and worked continuously on software at a new customer site and afterwards in a hotel through till dawn on Tuesday, then skipped breakfast and back on-site again from 8 a.m. till 9:10 p.m. jumping into a taxi that had been waiting since 9:05 p.m. and pell-mell back to Cardiff Central station.

I'm telling you this to give you some idea how I felt on the train. I'd had to skip breakfast though I nipped out for a sandwich and Starbucks soy-latte. Thanks to Great Western and a charming young lady in the buffet car, my dinner on the train was a heated ciabatta mushroom omelette sandwich, and two cold tins of Stella Artois. The effect on me was something like a tranquiliser dart meant for a hippo.

The last line instead of being horizontal veers upwards back over the previous lines. I'd conked out mid-sentence. I've no idea what the last two lines are supposed to mean.

I got into London after midnight and shambled onto the last Central Line train to Baker Street, where there were still trains running on the Jubilee line to Willesden Green. I was stocious.

--and Uncle Tom Cobley and all...So don't say you don't know what to read. Amazing what a mass email to their contact list can produce. 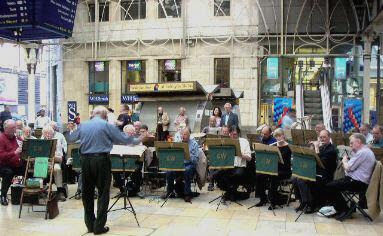 Red Woodward, in a typically flamboyant gesture, arranged for a silver band to greet our reporters on their safe return from Cardiff.
Posted by wire: 11:59 am No comments: 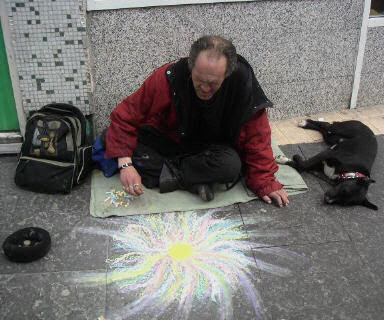 "Shocking footage of crowd control 'Chinese-style' has been obtained by Sky News. The film shows dozens of hired thugs running amok in a village just 60 miles from the capital Beijing. Villagers are shown being beaten with long canes while gunfire can be heard in the background. Six villagers are reported to have died while 50 were injured." (Sky)

Get up off your knees, people of China! 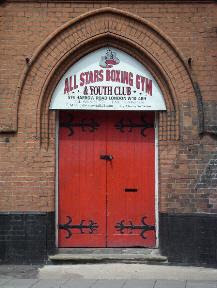 Entrance to Queens Park Hall, built by the Artizans, Labourers & General Dwellings Company Limited at the end of the 19th century.
Posted by wire: 2:44 am No comments: 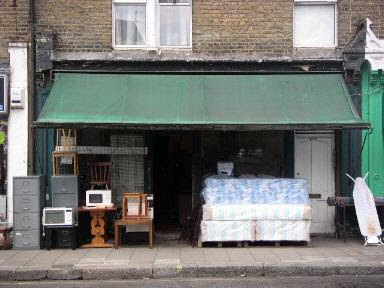 From You Deserve to Suffer by A.D. Winans

The Dress by Sam Binnie

When you are seven, you will wear a dress that you will look for, for the rest of your life. It is perfect, lemon yellow with a frill at the bottom and ribbons on each strap.

"The winner of this year's Harpers & Queen/Orange Prize for Fiction short story competition, Sam Binnie, is 23 years old and works for Penguin. Although she has written all her life, this is the first time she has submitted her work for a competition" -Guardian Unlimited.

"the accessing of the alchemization of the original recordation"

I'm sure I heard a kid say that in a playground in Finglas in 1964, and I've always wondered what it meant.

"The Chinese authorities have ordered all weblogs and websites in the country to register with the government or face closure in Beijing's latest attempt to control online dissent."

How long can a clique of arrogant and corrupt tyrants hold more than a billion people in servitude and humiliation? Not much longer, let's hope.

Arise people of China, you have nothing to lose but your chains!

"He was not able to condone the actions of [the murderer], he [the coroner] went on. But there were mitigating circumstances"

Read what the killer did. Now can you credit the remarks by the coroner?

You can almost hear the self-justifying jobsworths, and you can guarantee they round off every statement with "but [everything is fine]".

"Frustration" is an inadequate word for the pain caused by incompetent timeservers in every profession, who fail to take the initiative in their work and merely draw their salaries, and end up costing many of us our lives. We live, work and die as drones and slaves to a bureaucracy of lazy, self-satisfied slackers and parasites.

Malachy Dunhill
Posted by wire: 9:52 am No comments:

Inertia of pleasure is at its height when called to relinquish. Though we know needs must rise, some greater good suffuses the belly with restorative well-being.

Debating within (whether to rise). Once again drawn to a zone of mystical pleasure, that which is pleasing merely to contemplate, rightness of form, marvellous to contemplate, the better thought. Somehow it has to do with...something about...gone.

A Mouthful of Cut Glass by Tessa Hadley

An excellent short story, but the people...Sorry, I really hate them.

"The demolitions were ordered by the city engineer, Uri Shetrit, in a letter last November but were kept under wraps until dozens of demolition orders went out in recent weeks."

Sssssssshhhhhhhh! Don't tell anyone. Nobody will notice.

Malachy Dunhill
Posted by wire: 2:52 am No comments: