"New Short Stories 1, sees [Pretend Genius] team up with another rather eccentric and marginal artistic project, the Willesden Herald blog. A community blog written by the people of the London borough of Willesden [...] Overall, the collection showcases writers who are technically gifted, who are craftsmen and craftswomen with stories to tell and an assured way of telling them."

Of course, I've neglected to quote his more critical comments, but I ask you, people of the London borough of Willesden, can you blame me? We have worked our fingers to the bone (and that is just a medical fact, not a cliche, the bones are actually sticking out through the skin) to bring this august organ to vibrant life. And what do we get, we get it thrown back in our faces, that's what we get. Still he does recognise that great writer who is a good friend of Willesden, puts him on a par with people who have no par. The non-pareil. The reviewer is not devoid of all percipience.

The list of contributors to New Short Stories 1, together with last year's Willesden finalists continue to prove an outstanding literary form guide. Only this week Canongate signed up Nicholas Hogg. Today, the Daily Telegraph announces Vanessa Gebbie one of five winners out of over 2,300 entrants for their novel in a year competition.

Both writers read recently at the launch of New Short Stories 1. 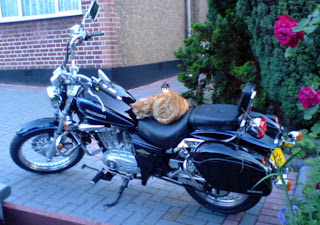 Marmalade cat on a Suzuki

This is me reading at the Willesden Writers event in the Metrowords festival, last Thursday.

And here are two poems by Daljit Nagra, an excerpt from his brilliant reading. Unfortunately we're only allowed two. These are "In a White Town" and "Darling & Me!" from Look We Have Coming to Dover! (Faber, 2007).

Look out for more excerpts from Lynsey Rose and others in the next podcast.

A team of explorers from Willesden went out into the unmapped jungles of Kilburn and captured this awesome and previously unknown beast. Now we bring you live on stage, in a twenty-ton, totally escape-proof cage

Local poet Daljit, has achieved the almost un-precedented feat of having his first volume of poetry published by Faber & Faber, Britain’s leading publisher of poetry. His collection is called, ‘Look we have coming to Dover!’ and several of the poems revel in the linguistic quirks of the British Asian scene. But those are just three or four out of the whole book and he also goes in for a bit of Hilda Ogden and Yorkshire dialect, very amusingly. It is perhaps a distortion for the media to concentrate on those ones that play with dialect, but they are funny. The rest of the poems are a rich tapestry of words, a muscular hammering of evocation such as in the title poem, and an eclectic mix of forms, including some Dylan Thomas-esque diamond shapes.

Members of the Willesden Green Writers’ Workshop, whose anthology, ‘The Monkey’s Typewriter’, won the Arts Council’s coveted Raymond Williams prize in 2005, will be joined by Daljit for an exciting evening of poetry and prose.

Free poster to drop from helicopters

* In association with the New Willesden Poetry Minstrels "A song, a dance and a good ol' dithyramb!"
Posted by wire: 5:13 pm No comments:

Sky News Video. It's disturbing to watch. Boycott Beijing 2008 and also boycott London 2012, because the abbatoirs here are just as bad.

Show Me the Sky

The coruscating prose and inspired storytelling of Nicholas Hogg has been recognised by Canongate publishers, announcing "Show Me the Sky to be published in 2008.

His short story "Paradise" is included in "Willesden Herald: New Short Stories 1" (see Amazon links on the left. At about 13,000 words it is an example of what is sometimes called the "long story" genre.

My father was born at the height of clouds. He entered the world wailing, lungs pumping the mountain air and desperate for oxygen. He lived because he had the breath of a Kalenjin, as had his father and his grandfather before, a long line of proud and noble descendants from the ancient tribe of highlanders from the hills of the Great Rift Valley.

He grew up at an altitude where visiting relatives from the lowlands fainted and had to sit and take a rest from the sky. A village where the rhythm of life was set by the stars and the moon, the sun and the rain, a village where horseless cowboys herded the cattle, and my father and his brothers ran down the strays barefoot. (From "Paradise" by Nicholas Hogg, in New Short Stories 1)

I heard him interviewed and he claimed not to try for this silky smooth effect. It bothered him to be constantly referred to as a masterful prose stylist, a writer's writer, because it was in danger of making him too self-conscious. However there is no doubt that, as Richard Ford said in his introductory notes to this story, that there is no "grit" in James Salter's style. Yet I found that this story was as horrifying as just about any I've ever read. It trickles into the mind like a snake under a door before striking with deadly effect.

I've sold out and freshened the Amazon links designed to get some commission. However, in three years they have never generated more than about 75p, which is too small an amount for Amazon even to transfer. Now that they are spanking the brand newy, mayhaps they will garner mucho lucre, faith, musha, och go away.

I will list books mostly by local authors, and mostly of short stories and poetry that I have read and highly recommend, such as Look We Have Coming to Dover! by Daljit Nagra, the bard of Dollis Hill. Naturally, I list my own book as well and any with Willesden in the name! (Please take all these crimes into account when sentencing.)

By the way, you can come and see Daljit Nagra at a free Metrowords Festival event hosted by Willesden Writers Group at The Space, Willesden Library, 95 Willesden High Road, 8 p.m. next Thursday the 24th. I heard him read at The London Tavern, in a benefit event for the Lebanon, and it was a great night. Entrance free, and there will be a some wine, juice and water on the house.

Let's invite the Queen to Dublin, join the Commonwealth

Now that Bertie Ahern has addressed the Houses of Parliament and planted a tree at a museum with Ian Paisley, who has stated on Irish radio that he is proud to be Irish and reminded listeners that Dublin was the capital before independence, where his father's birth was registered, for example, not to mention the extraordinary power-sharing setup in Belfast, it's past time that Ireland invited the Queen on a state visit to Dublin. Let's join the Commonwealth as well, if they'll have us—none of this will lessen us as a nation, but it will help mend relations between north and south.

Harry Lemon, Dublin
Posted by wire: 11:07 am No comments: 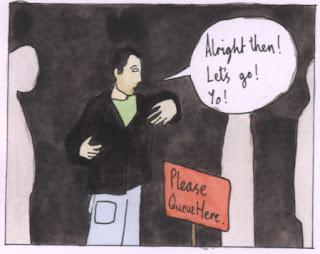 "Daljit Nagra's debut full-length collection, Look We Have Coming to Dover!, was published by Faber earlier this year to widespread acclaim, although the title poem appeared several years ago and was awarded the Forward Poetry Prize for best single poem in 2004. His work has been also published in journals and his pamphlet, Oh My Rub!, was a Smith/Doorstep Books winner. He teaches English at the Jewish Free School in London.

"Try your hand at his workshop on dramatic monologues" (Guardian Online)

The finest storytellers known to humankind, as identified by the talent scouts of the Willesden Herald gathered for the launch of New Short Stories 1. 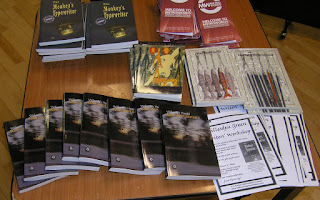 I started by dedicating the evening to Shakti Bhatt, whose story "Born Again" is in the anthology. I had the sad duty to tell the audience that Shakti, a former editor for Random House India and recently another publishing venture in New Delhi, had passed away just a few weeks ago after a sudden illness. She was only 27. 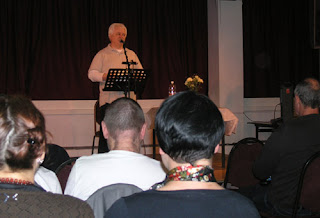 From my notes: Tonight is a celebration of the art of the storyteller, especially the short story genre. The short story is the most naturally perfect of the literary arts, consisting of a story that can be told in one sitting. We can also include self-contained chapters from novels under the same umbrella. (Some of our best friends are novelists, y'know.) 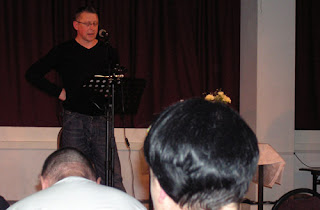 Steve Finbow, hotfoot from Japan, started the evening off with a virtuosic, almost musical recital in effect, of an excerpt from his extraordinary 'Balzac of the Badlands'. If that is not a novel in poetry, then...there is no then—it is.

Jonathan Attrill read 'Incident on a Country Road', a sinister short story that held the audience in rapt attention.

Lynsey Rose read from her disturbing unpublished novel about a self-harming office worker, which I described as like a cross between Bridget Jones' Diary and Kafka's The Trial.

After the interval, I failed miserably to create a coup de theatre by wandering on stage reading a copy of the Willesden Herald. It says here: "Willesden Library Centre: for one night only: The New Short Stories – a cross between PUNK and EMO." 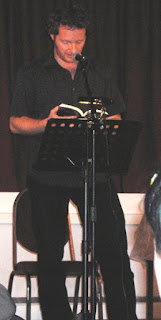 Nicholas Hogg read from his long story 'Paradise'. In his introductory remarks he said that he felt the task of the writer was to bring out the good in things (I'm paraphrasing). "It's not all doom and gloom."

Jeff Achampong read from his novel-in-progress, nearly complete, which is a brilliant tale of a guy with sickle cell, torn between the ties of family and the dangerous street life of gangsterism and drug dealing. Having had the privilege to read it, in my opinion it is a brilliant novel, and could be a very big hit. 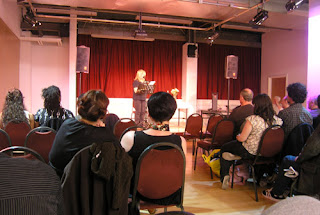 Vanessa Gebbie rounded off the evening with a reading of her BBC Guildford prize-winning story, "Naming Finbar", which had the audience in knots of laughter. A marvellous upbeat way to close. 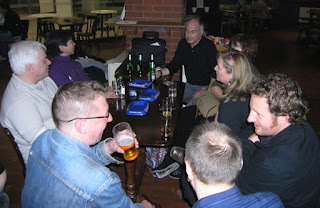 Afterwards in Gigi's, a well-earned drink with Stratos, all the way from Brussels, whose cover art adds so much to the book.

Stephen Moran
Posted by wire: 12:16 am No comments:

"A bead of sweat is visible through the eyehole of his famous black balaclava. Latin America's most celebrated living rebel must be feeling the heat, but a glass of water would mean taking off the mask and that is out of the question. He makes do with a puff on his pipe, and a subject that is close to his heart. 'My new book's coming out in June,' Subcomandante Marcos announces with relish during the first interview he has given to a British paper in years. 'There's no politics in the text this time. Just sex. Pure pornography.'"
(Guardian)

Look at the picture: has Gerry Adams been leading an amazing double-life as Subcomandante Marcos? A character straight out of Flann O'Brien.

* Let's all start wearing these bloke-niqabs. How about one with a Willesden Herald logo? I'm coming over all "Lawrence of Fitzrovia". Ed
Posted by wire: 8:18 am No comments:

"The ship is dumped into the atmosphere where it burns up." [sic]

I don't even know where to start with this. 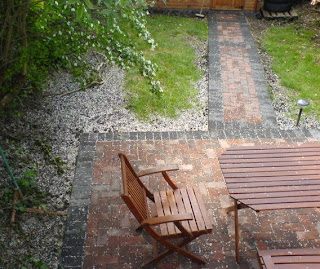 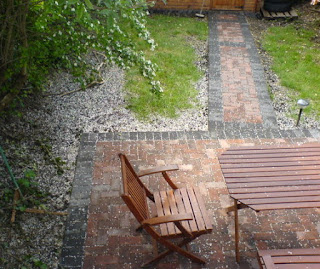 Send Blair to be Our Man in Baghdad

Boris Johnson in the Telegraph

"I flung wide my window here in Westminster, and I could feel my wrath abating. Yes, Britain still seems to be here, after 10 years of Tone. The chestnut trees are still producing their lovely candles, and it is still true that there is nowhere on earth more beautiful than Britain in early May, and yes, there are indeed flotillas of gaily-coloured cyclists sailing down the streets, and for one pathetic moment I was so entranced that I almost relented."

Boris once more hits the nail on the thumb. Peerless. New word for today: dithyramb.
Posted by wire: 10:25 am No comments: