Why did the fictional chicken cross the road?

"Though this statue is of one man, it should in actual fact symbolise all those who have resisted oppression, especially in my country." (Nelson Mandela)
Posted by wire: 1:49 pm No comments:

"Sunny weather drew around 600,000 people to the Notting Hill Carnival this bank holiday weekend to enjoy the parades, dancers, costumes, sound systems and street performances. The theme of this year's event was Set All Free, commemorating the bicentenary of the abolition of the slave trade" (Guardian Online)
Posted by wire: 4:05 pm No comments:

From a reader in New Zealand

Inspired by Verses about a Faraway Land

We're big down under. At least in one department.

The names of people who are dead
are like expired tokens, special offers
for something years ago,
used tickets from plays you saw,
went to see in theatres
that maybe now are bingo halls
or shopping malls,
the names of casts
in order of disappearance
and technicians too,
who privately could be impressed
to some extent, concerning the names
of people who are dead, or resting,
no longer players. 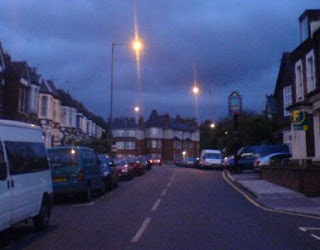 Walking south, then round the block*

The vast stainless steel plant
of the Capital City Academy
lies under mostly grey at first,

till turning east onto Donnington Road,
all of the sky, over half the world,
appears electric-lit or petrol blue.

North-northeast later,
under ice blue floes,
down to the cold of whitened ash.

And where would I be without
the ivory lightbox of an upstairs bay,
harmonising with a white
street light outside?

A war party of black cloud has halted
on the ridge of Dollis Hill.

At the corner back, a sort of prayer:
Vouchsafe me a view
of the sanguine amber, oh yes,
the peach red line, yes,
scrabbed in the west...

Poppies in the wind, today 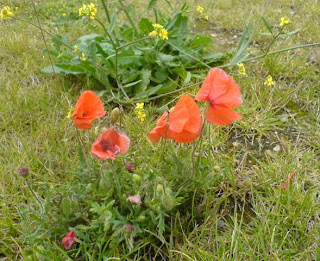 "A paedophile accused of raping a five-year-old boy just weeks after leaving jail had been prescribed Viagra while inside, his lawyer claimed."

He had a packet of Viagra in his pocket, allegedly prescribed before he left prison, when he was caught with the child.

Now that's what I call a headline - 1

"How could a man who, in the words of one close friend of Miller's, 'had such a great world reputation for morality and pursuing justice do something like this'?"

More complex than it appears at first glance, a detailed report about how and why Arthur Miller disowned but eventually left a bequest to, his Downs Syndrome child.

Memoirs of a Madwoman

"From turning a door on four roller skates into a Heelykididdlywatt and fending off sleazy guys in an all-night coffee shop, through first love, the scars left on a generation by the Vietnam war, and an eye-witness view of Belfast at the peak of The Troubles, these memoirs chart the triumphs and tragedies of an ordinary life full of extraordinary people."
Posted by wire: 12:53 pm No comments:

"...seven exclusive and previously unpublished short stories by some of today's finest writers."

'Putting Daisy Down' by Jay McInerney.
'J Johnson: A Writing Life' by Nick Hornby
'Sweeping Past' by Yiyun Li
'Smithy' By Rose Tremain
'Message In A Bottle' by Jeanette Winterson
'Peach Melba' by John Burnside
'The Neddy Silver Story' by AM Homes.

Science for the Confused - an occasional series

I think I've said this before, but it's been on my mind again. The complexity of DNA is enough to account for the variations between individuals, but not enough to specify the pattern for the organism. Therefore DNA is probably only a series of variations to apply, but to what, we don't know. I have said it before, I remember now. It's like the instructions to a tailor: I want a blue suit, with a velvet collar and this and that measurement. It does not tell the tailor how to make a suit. And who is the tailor? What causes a plate of chemicals to turn into a human being? Or a banana? All these things with DNA, doesn't it mean that DNA is really synonymous with life? But there are more lines in a not-particularly-complicated computer program than there are in the human genome. So where is the real pattern for life? We can put a pile of amino acids in a saucer but they won't get up and write À la recherche du temps perdu.

Estimates vary from 25,000 to 80,000 effective genes in the human genome, and currently thought to be at the lower end of that range (ref: here). There are more parts in the body than there are elements in the genome! Imagine what it would need to program any one part of the body, never mind the brain, for example. You couldn't program even a wonky robot with that number of instructions, let alone a system to build a wonky robot (which, some might jokingly argue, is what we have).

Thank you for your email and link to the blog that you sent. We have been inundated with letters of support and advice and the campaign team are reading each one. Your comments on restoring the ironwork removed during the war (and working with the Heritage Fund) have been noted and I will pass this on to the policy team.

The Willesden Herald has secured official backing for the next Willesden short story competition. This will mean publicity in the autumn, an address for printed entries, and an awards event in the new year. Watch this space for updates. Everybody here in the WH newsroom is jumping up and down. Du jamais vu.

Walking to the shops ‘damages planet more than going by car’

There's a whole list of fascinatingly counter-intuitive facts in this article. I've always suspected that most recycling is more wasteful than reclaiming land with landfill. Surely when sea levels are rising, rubbish could be used to build up the coastline? Sounds naive, but I have seen land reclaimed from the sea around Dublin, and certainly it's done in the Netherlands, is it not?

When I saw a bird like this in the grass at my primary school, I wondered if I'd discovered a new species. That was easily possible, then. In my mind I was always attributing marvellous discoveries to myself. I think I was really insane, if a child can be insane. A friend's kid, not so long ago, told me his teacher was an alien. Maybe insanity is the normal condition of childhood.

US Soldier Jailed For Iraq Attack

"A US soldier has been sentenced to 110 years in prison for his role in the rape and murder of a 14-year-old Iraqi girl and the killing of her family."

There is a difference between the abuse under Saddam and under the US occupation. There is a vestige of justice here. It's little or no consolation to the victims, but at least we know there is a system of justice that is trying to eat the elephant of abuse one bite at a time.

What's to be done?

Darfur is as bad as Nazi Germany - and I know

"When details of the Holocaust came to light, many - and not all of them Germans - took shelter behind the assertion: 'I did not know.' That offers us no escape route from the shame of Darfur. We've known, wrung our hands and done nothing. It's going to take some living down." (W. F. Deedes, Telegraph)

You might not agree with his conclusions, but he has a powerful case to make. He has seen both first hand, and not just in passing. I still think it should be possible to force governments to behave in a civilised way, without going to war. In this case, if China is the difficulty, it should be China that is pressurised.

In my not very clever or educated opinion, we should not accept any imports or do any business at all with any country that does not have labour laws on a par with our own, at least. If it means we have to have a period of austerity, so be it. All countries should adopt the same rule one-by-one, till governments like the tyranny in Beijing are forced to collapse or conform to civilised standards.

The same for human rights as for labour laws, there should be a complete set of rules, comparable to those of the EU. When I say no trade with any countries that are not up to the minimum standards according to these rules, I mean no trade in or out of the EU, not the UK.

In the great tradition of wrestler Torabolikoff...

"The expedition leader and famed polar scientist, Artur Chilingarov, told colleagues on the surface that his craft had reached the seabed. 'The landing was smooth, the yellowish ground is around us, no sea dwellers are seen,' he said, according to Tass."

"'Once we discover that the self in itself is a monstrous deceit, that the self is something transcendent in disguise, we...begin to realize that our normal consciousness is in a state of trance, that which is higher in us is usually suspended.' - Abraham Joshua Heschel"