Just a reminder that the Willesden short story competition has now closed and the short list and winner for 2007 will be announced here as soon as the results are in, at which time short-listed writers will be notified by email. Thanks to everyone who entered.

Saddam: Re-trial in the Hague?

"Trials conforming to international standards of fairness would have been more likely to ventilate and verify the historical facts, contribute to the public recognition of the experiences of victims, and set a more stable foundation for democratic accountability. Instead, unlike the Nuremberg trials, the proceedings have fallen far short of creating the reference point that could clarify for Iraqis what happened and why." (Richard Dicker)

Why not extradite Saddam Hussein to the Hague (some way can still be found), like Milosevic, and let's see what can be done to save this situation. Otherwise tomorrow those executing him will be reduced to his level.

U2: Window in the Skies*

A montage of brilliant clips from legendary performers, an outrageous rip-off that makes it look like they are performing the new U2 track. It must have taken a massive bit of admin and considerable expense to get all the permissions. Weak point: using a picture of an atom bomb test to lend a bit of oomph at one point. Altogether very entertaining though.

Not sure about the pictures of African urchins near the end, another crime of sincerity. Wasn't it Bono at a concert in Ireland, who was telling the audience that every time he clicked his fingers another child died in Africa. Click, click, click. Then with a fine example of the Irish sense of humour, somebody in the audience shouted out "Well stop clicking your fingers then!"

She never answers a question, all she does is to blear the issue and defend the status quo. (Ref. interview on Radio 4, The World at One today). This is a terminal political illness, as seen in the last days of the old Tory regime.

The prize was presented by Chief Grayson Bighat (Ms) of the Surbiton Commanche nation.
Posted by wire: 2:31 am No comments:

A civilian convoy bombed in the Lebanon
Posted by wire: 9:39 pm No comments:

A talk by George McGovern, who has served as the United Nations' Global Ambassador on World Hunger since 2001. After his advertised address, he goes on to speak with authority on the parallels between the Vietnam war and the present Iraq war, and argues with ineluctible logic for the withdrawal of US forces from Iraq.

(Mar 22, 2006 at the University of Virginia, Miller Center of Public Affairs)

Fighting hunger through school dinners for every school in the world: a brilliant idea, much more interesting and useful than fighting wars.
Posted by wire: 1:27 am No comments:

The solstice has passed, the days are growing longer. From all the staff here at Willesden Herald house, Happy Hannukah, Merry Christmas, Eid Mubarak and whatever you're having yourself.
Posted by wire: 11:52 pm No comments:

No flights in or out of Willesden International today
Posted by wire: 5:03 pm No comments:

It's a foggy night in Willesden.

"What's cooler than a box of crayons? Customizing your blog with layouts"

This is the great new friend of Bush and Blair. Fucking savages. (And the Libyans are too.) 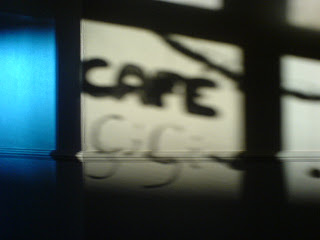 This is the shadow on an interior wall, cast by the sun shining through a sign in a window. Gigi's cafe bar reopened recently, after renovations due to a health and safety order. I can see surviving customers gradually returning over the coming year.

I've always remembered the brilliant dramatisation "Insurrection" (written by Hugh Leonard) and wished I could see it again. There are several excerpts from it online now. (Why don't they put the whole thing up?) Although it looks different, naturally dated somewhat, I still think the clips are great.

The RTÉ archives also contain marvellous interviews with survivors such as James Connolly's daughter, recalling her and her mother's visit to him before he was shot. Every day of the week has a separate page with a list of the special schedule for TV and radio and clips, though it's a pity how many have been lost. (I know, one could say that about people as well.)

Here is a clip from an interview with Kathleen Clarke widow of Thomas Clarke, one of the seven signatories of the Proclamation of the Republic (all shot). "You must make your goodbyes as casual as possible...I didn't really ever see that he'd come through, I must say."

Kathleen Clarke is also in this clip, talking about P. H. Pearse. One gathers that she remembers him not with any fondness, as an exceptionally silent type.

Former president Seán T. Ó Ceallaigh recalls the looting in O'Connell Street and his failed attempt to deal with it under orders from General (James) Connolly. Connolly subsequently talks about sending somebody to shoot some of the looters: "Shooting over their heads is useless. Unless some of them are shot, they won't stop." Ó Ceallaigh requests and is allowed to be excused from that duty. He doesn't know if it was actually done. Here he is again, talking about the release of Bulmer Hobson.

"Seán F. Kavanagh, a member of the Irish Brigade, recalls meeting [Roger] Casement at the Hotel Saxonia in Berlin on 10 April 1916." (About Roger Casement)

"In this [vivid] extract, Norah Connolly O'Brien recalls making her way back to Dublin and her concern to find out how her father was." She recalls a friend telling her, "They're all dead and slaughtered. She battered us with words..." In another extract, she describes her [and her mother's] final visit to her father before his execution." Very beautiful, the words, but heart-rending. Because of Connolly's injuries his execution was worse, if that is possible, than the others: they shot him sitting in a chair.

After the surrender, the hostility of other Dubliners to the rebels as they were marched away, is recalled by one of the prisoners. He thought that there was nothing left of Dublin, it was all fire, "still burning."

There are other recollections of the leaders, people and events as well as coverage of the opening and closing ceremonies, the march in Belfast, and speeches by that sanctimonious old prig De Valera, who was largely responsible for the miseries of Ireland after 1916.

I was 11 in Easter, 1966. For the fiftieth anniversary of the rising, we had three giant new flagpoles installed by the entrance to the De La Salle primary school in Finglas, and we'd been practicing for weeks to sing on the occasion of their inauguration: The Foggy Dew and Roddy McCorley. About the hemp rope on his neck, the golden ringlets clung.

We were then all bused into O'Connell Street on Easter Sunday and marched to Croke Park for an extraordinary pageant. There were parades and displays by hundreds of variously costumed people portraying Irish history. Here's an archive recording about the 'Aiséiri' [rising] pageant. The whole effect of the commemorations was an inoculation of nationalism that never needs any booster shots. The next time I marched from O'Connell Street was the Wednesday after Bloody Sunday in 1972, with 100,000 in protest to the British Embassy.

Perhaps I should close with the special version of the national anthem that was used at closedown every night for the week, with drawings of the seven signatories ending up with Pearse, proving again that the writing of poetry is no guide to good character.

From County Kilburn via Puckaun, Tipperary to Manhattan and back, every dentist's warning to the world, Shane MacGowan and the Pogues. Here with the musically corrective and braver-than-most indulgence of feisty Kirsty MacColl. The song is credited to Shane MacGowan and Jem Finer.

Here they are again in a great performance of Dirty Old Town, slightly marred by an interruption near the end. The quality of these bootleg recordings is better than the usual. Kirsty is singing her father's song here. Ewan MacColl wrote a lot of fine songs, and could have lived well on the proceeds of "The first time ever I saw your face", possibly one of the best songs ever written.

Kirsty was killed by a speeding boat in Cuba and is much missed. She once said of her marriage to Billy Bragg that in ten years she had "never looked at a carving knife without thinking about sticking it in him." Had it been Shane, she probably would have.

Blowin' in the Wind (live) - Bob Dylan with Joan Baez - excellent performance (does he flinch from her at the end?)

Jack Kerouac interviewed and reading from On the Road - despite inane and patronising comments from interviewer Steve Allen, who also plays horribly (too busily) on the piano over the reading

End of the Line - The Traveling Wilburys - supergroup with Harrison, Petty, Dylan, Lynn, and the disembodied voice of Roy Orbison (note the empty chair). This track was played memorably at the end of the classic comedy series "One Foot in the Grave".

Here's another one from the Wilburys, superb quality this time: "I won't back down" featuring Tom Petty. Some of the special effects are nice, even if we're used to more spectacular ones now. The Wilburys recordings are unobtainable now, but there are plenty more on YouTube. Handle with Care

When the Music's Over - The Doors - pristine 12 and a half minutes of melancholy brilliance.

"...they are aspiring to have nuclear weapons, as America, France, Israel and Russia?" (Olmert)

Back to back with Blem Vide

Group blogging from the streets of Willesden

"Residents in Willesden have formed their own group blog with hilarious results. Add the Willesden Herald's RSS feed to your MIX page if you want to get an insider's view on what life is like in this particular London suburb."

We're all over the place, like a cheap suit. 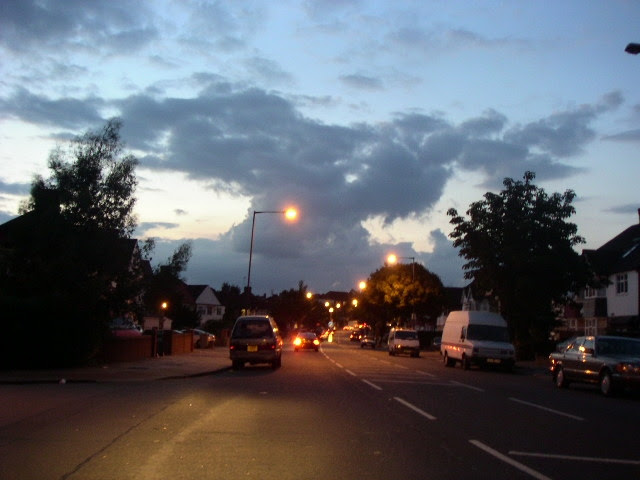 Just round the corner from Willesden Herald house, some houses have been partly destroyed, at least ten roofs visibly damaged*, rubble piled in the street, cars damaged. Several people have been treated for minor injuries. According to an eye-witness (on the BBC lunchtime news) it was about 25 metres wide and dark with whirling debris.

There was also a loud thunderstorm this morning accompanied by a heavy shower of hailstones. All about 11 a.m.

SkyNews is now reporting a hundred houses damaged. BBC says "up to 150". Here is the BBC report with a link to a video. There have been helicopters overhead all afternoon.

Somebody should get an award for the photo collection alone, and much more besides. Try searching photos for "Rising Sun", for example. "Michell and Phillips's Kilburn Ales" - whatever happened to them?

C'mon whoever you are, you have excellent taste but this book is three days overdue. Some poor author is starving, deprived of lending royalties because of your selfishness.
Posted by wire: 6:40 pm No comments:

Creatures of the Earth - Part 1

Creatures of the Earth - Part 2

(The link to part 2 given online in part 1 doesn't work.)

"One of the most respected postwar Irish writers, John McGahern returned repeatedly to this powerful story of love and loss. He finally finished it just before his death last year." (Guardian Online)