The Spotted Dog: Demolition in progress? 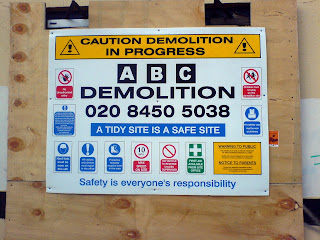 Don't cry but, "Willesden Green has a long history with the area being recorded in the Doomsday Book of 1086 as 'Wellesdone'. By the 14th Century a small settlement had formed around a woodland clearing, which later became Willesden Green. By the middle of the 18th century the village had grown and had its own pub, ‘The Spotted Dog’." (Ref: Willesden Green Conservation Area). It used to be said that a taxi driver might not know where Willesden High Road was but could take you to The Spotted Dog.
Posted by wire: 9:48 pm

No way! Are you kidding that the Spotted Dog is being demolished? I just found out that my Great Great Aunt Matilda Twyford (nee Howard) and husband James were landlords there in the 1840 and 50's. I looked forward to visiting from Canada if I can soon. And now I hear that after hundreds of years it goes right when I want to see it! My luck, L. Moore, Toronto

Not demolished, turned into apartments.
http://tinyurl.com/39vajcv

appartments well as good as demolished . i used to live in willesden green in the 80s and we loved it