"Equipment was brought in on articulated lorries on Friday night, and suspects had the choice of being strip-searched or scanned. The machine shows a "graphic" image of the suspect minus their clothes. [...] The £120,000, 500kg X-ray device was part of a 160-metre convoy of vehicles which took over the high street. The operation began at 2140 GMT as officers raided the Elm Tree and the Palm Shade pubs, where there were about 200 people."

Suddenly she had to go so I grabbed a napkin and wrote: "Kristin's fake number is:"

She smiled and stared at the napkin for a few moments. I think it was a new form of murder she was trying out.

From 3 AM Magazine, Charles Street Romance by J Tyler Blue.

"I think this is filth, and I certainly don't want to be associated with it. I was never involved in anything like this. In my day, we did it the proper way - £25 without extras, food and drink, and a choice of ladies. We knocked off £5 for old age pensioners and we charged men half-price if they were past it, and just fancied watching."

*I think Belle has given the game away -if you'll pardon the expression- Pros don't kiss. She must be an amateur, or a hairy-handed gent. Ed

Your super soaraway Willy continues to bring you the news before it even happens. Another remarkable example occurred this month, when we announced the discovery of a new planet on Saturday the 6th. NASA didn't discover it till 9 days later. Even then they got the name wrong. Willesden Observatory confirmed that the correct name for the planet is Edna, not Sedna as NASA stated.

No free soup for brain surgeons

A brain surgeon was suspended from Queens Medical Centre in Nottingham, "because he didn't pay for a second helping of soup and croutons." You bureaucratic asses! Already four brain operations due to be done today have had to be postponed. (Source: Jeremy Vine show, BBC Radio 2.)

For Christ's sake, send us the details - we'll appeal to Herald readers to raise the funds to pay for soup for this surgeon. Terence Hope is a top brain surgeon, and there is a 40-day wait for brain operations in Nottingham.

Droopy gets the hots

What the hell is wrong with the Liberal Democrats? Don't they know that 16 is not just a number to be tidily classified away, it's a very young age, and very many children are not mature at that age. Leave our damn 16 year olds alone, you losers.

Who does the goverment listen to?

We know they don't listen to the general public, except under the control-freak conditions of their great non-conversation. We know Alistair "this will fuck Gilligan" Campbell was one. We know Peter "repeat offender" Mandelson is one. But wait till you get a load of who David Blunkett is listening to, this apologist for racism.

They want to "cut and run"

That is a so-called Daily Mirror "Exclusive." Pish! Remember where you heard it first:- right here (February 29th 2004) and here (November 28th 2003) in your super soaraway Willy.

Mars (and/or any other planet) should be contaminated.
Contaminated with life.
Our planet has extreme situations as regards soil, climate, light, weather, amounts of water, temperature, pressure, etc.
But it was not born like that.
Life changed the hell that Earth was into what we know nowadays.
It started from very simple organisms some of which still roam in the fieriest conditions our planet can produce.

I hold that we have to contaminate Mars spreading millions of
millions of lichen sporae thrown all over Martian thin atmosphere.
Lichens are a symbiotic (or reciprocal commensalism) community of algae cells in fungi substrates and some can even produce their own water. Useful bacteriae should also be tried.
How? Capsules containing the sporae have to enter Mars atmosphere jettisoned by a bigger capsule at the smallest possible angle to allow them the longest possible trip close to its surface in a criss-cross fashion, vents have to open to allow thin air to come in and blow the sporae out through a "tail" opening. Mars atmosphere currents at say a mile high, would disperse the sporae appropriately.
Some will land in bad places but some will not. The latter may start reproducing and mutating for better performance.

You know how lichens work.
Lichens (or other lower organisms) should be taken to the red planet to start using the CO2 and releasing O2. Which types?
We should take there the more sturdy varieties. If any start reproducing, half of the battle is won. Other organisms such as safe bacteriae, unicellulars and protozoa should also be tried in the Martian atmosphere as it is now. I am aware that changes in the atmosphere from these sources might take millennia. But we will have to do this for a start. Because one day we will have to start.
Think of the advantages if any Earth useful organism adapts and settles in.
Perhaps certain other low-requirements desertic-type cryptogams (or even phanerogams) can be sown/dispersed thereafter.
A wild dream perhaps?
NASA's space saga has not been a dream since the first day?

The Postmodernism Generator: Communications From Elsewhere (via Guardian Talk.)

"The essay you have just seen is completely meaningless and was randomly generated by the Postmodernism Generator. To generate another essay, follow [the] link.... The Postmodernism Generator was written by Andrew C. Bulhak using the Dada Engine, a system for generating random text from recursive grammars, and modified very slightly by Josh Larios."

Hah! Interesting. The New Yorker is not putting Martin Amis's story online - it must be too strong for them. Instead they have put up next week's story by Alice Monro this week. The issue of the 15th of March will not leave a trace online, it seems. This is Alice Monro's new story, by the way: Passion.

I thought I might type an extract from Amis's story, In the Palace of the End, but it's too difficult. The whole thing is horrific, and I don't think I can just take one piece out of context. It's about a group of doubles (a la Saddam's) and their duties, which involve them in torture and video-taped rape. They also suffer in parallel whatever injuries their master suffers. It's satirical beyond the point of black comedy.

Martin Amis is a brilliant writer. I wonder if he's reading Mikey? The interrogations in Uttering a Forged Instrument have something in common with the gruesome tortures in this new short story: In the Palace of the End. (Sorry, that link is broken. It might come on later, who knows. Meanwhile you'll have to get hold of the magazine offline.)

The government is looking closely at this initiative to help needy students starting out on their lives of debt.

What is the value of X?*

If Steve Wright's Sunday Lovesongs on the BBC gives you the sick, check this tres cool alternative - Lover's Tea, on 93.8 Vibes FM. [They're on at the same time on Sunday mornings. Ed.] 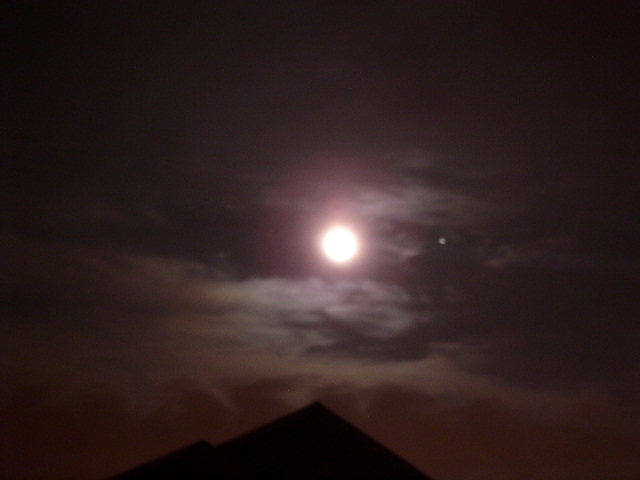 This picture just released by Willesden observatory shows our familiar moon with a smaller new companion moon (to the right of it in the picture.) You can just make out the great pyramids of Willesden in the foreground.

Science journals are invited to contact the Willesden Herald by email to arrange syndication. Ed.
Posted by wire: 7:44 pm No comments:

War - they did it - now they want us to forget it

We don't say "forget about it and move on" in the case of just one murder, or even one death through corporate negligence, say.

I see that, in his speech today, Blair is trying to prepare the way for revelation of legal advice to the government that the invasion of Iraq was potentially illegal, by saying that the law is wrong. He wants to move on, oh yes, he wants to move on now. Not so fast, Mr Blair, you'll move on soon enough. "All political careers end in failure."

Any stalking horses out there?

Will New Labour bodgers undermine the rule of law?

The Lord Chief Justice (no he's not a character from Gilbert and Sullivan) has slammed the government's incompetent tiddling about with the bells and whistles on the engine of state, while the train heads full speed for the buffers.

It has taken our polyglots months of translation, and pan-technicons of electrickery by the consultant from Inbox, but at last we can unveil the Willesden Herald Greek Edition. Kalispera.

Email ThisBlogThis!Share to TwitterShare to FacebookShare to Pinterest
Labels: Simon Moribund
A new story by this author is something I always look forward to, and there's one in the upcoming edition of the New Yorker: Long Ago Yesterday by Hanif Kureishi.

There was a rather scary and ominous short story this week by T. C. Boyle this week, called Chicxulub.

I call on my supporters to do everything in their power to encourage the re-election of George W. Bush as President of the United States of America in the coming November election. This man has done more to promote our cause than all of our martyrs put together. It would be a disaster for our ambitions if a sympathetic figure such as John Kerry, with his vast experience, expertise in foreign relations, shrewd judgment and efficiency is elected to office. What we seek is all-out war, by agreement with the White House, whose aim is the same under the current president. Vote Bush!