Unrepeatable offer - for a limited time only

Academies Among Worst Schools In UK

"Seven of the 13 privately-sponsored academies, which have been open long enough to provide results, appeared in the table of the worst 200 state schools in England." (Skynews)

In the light of reports such as the above, and others ("Creme de la Creme: rich and thick" etc.) we at New Improved Labour (Priorities: War, War & War Education, Education & Education) recognise that we need to step up our efforts in this area and that is why we are offering you the bargain of the century.

Special offer: buy one school, get one free! And now for a limited time only, with a free peerage thrown in. Suits you, Your Lordship! Sick of modern science, why not teach your own version?

Just cut out the coupon below, fill in your chosen peer title (subject to availability) sign and post together with your donation to, Schools and Peerages Offer, New Improved Labour, 16 Old Queen Steet, London SW1H 9HP.

The festival has been underway since the beginning of March, as usual we are up to the minute here, and all we know about it is that it is a huge showcase solely for the purpose of shilling our own Willesden writers' group anthology, The Monkey's Typewriter (isbn 0953019551, now with extra deluxe Raymond Williams award sticker). Never mind all the other famous writers involved.

Every one of the reporters here has been so enthralled with the readings that they forgot to post details of events for all the hundreds and thousands eager to descend upon such trifles.

Another shilling please for Fish Drink Like Us, a new anthology*, from which "Time Out, Carmencita" by Stephen Moran has had audience members throwing away their emotional crutches at these readings, and falling into hysterics. There's another one tomorrow night but if you suffer from weak sides please don't risk it.

You have four more chances to be healed when this outstanding literary revival meeting comes to your neighbourhood. Praise the Lord Mayor.

Death to all apostates

"Mr Rahman stands accused of apostasy, or abandonment of faith - an offence punishable by hanging" (Guardian)

No less a fate should befall the pigdogs who worship at the cylindrical RM1 brothelshed in Walm Lane. RM is the only true faith, as exemplified by Lord Rotor's only living representative Jeremy and his Holy Uncle, peace be upon them and their Highgate ashram. In the name of the Rotor, the Grassbox and the Holy Roller.

"Original fiction: Part-time tiler Mikey Delgado is one of the winners of this year's Willesden Herald short story competition, judged by Zadie Smith. Read his story in full." (Link)
Posted by wire: 11:43 am 10 comments:

This cartoon in the Guardian, is an insult to pigs. Why are people so beastly to the clever and harmless porcus porcus -just because I don't eat them doesn't mean I wish to see them abused like this. What have they got to do with the excellent new education bill, which we paid good money for? It's thanks to farseeing planners like us that your children won't have to attend the same schools as your neighbours' children. That's choice, I think you'll agree.

Pretend Genius Press is to publish "Secure" by Mikey Delgado, one of the joint winners of this year's Willesden Herald short story prize, in an anthology entitled "Fish Drink Like Us". Mikey's poetry is also featured in the companion volume entitled "Last Night's Dream Corrected".

Outstanding newcomers are included alongside established and award-winning poets such as Bill Berkson, Joanne Kyger, Michael Rothenberg and the one and only Ira Cohen, who also contributes a prose piece. Each poet has a separate section and the physical and visual pleasures of the book are intended to complement the poetry on the pages.

The fiction collection is characterised by highly developed characterisation, uncompromising directness, engagement, and diversity from the surreal and unconventional to the earthy and hilarious. It contains a wealth of showcase pieces by new and established writers, Timothy Gager, Kenji Siratori, Sean Brijbasi, Amy Muldoon, J. Tyler Blue, Andy Henion, Jeremy BeBeau and many more.

The anthologies have their own rather cool web pages. The covers were created by esteemed artist Stratos Fountoulis. Both books are edited by Feargal Mooney.

Moon over the Great Pyramids of Willesden

I read a bit from the above at Gayton Library tonight to a lot of merriment. Siobhan Curham, who was presiding, asked where people could get the complete story. I mentioned that it's going to be published this April in Fish Drink Like Us, an anthology of new fiction. The promotional website takes quite a while to download but you can bypass the flash intro by clicking on "Skip Intro" which takes you to the books. (Scroll down and click on Enter to see the show.) The covers were designed by Stratos. The books and the website are by Pretend Genius.

Let's have some cartoons on this. Bearded blokes shackled in dungeons. Not hostages, the other side. Actually no -- whoever. They always make me laugh, especially in the Reader's Digest.

*Great old program! The stalking horse. Ah, the good old days. (Did they ever have torture in those days?) Ed
Posted by wire: 9:12 pm No comments:

Coming soon to your region. Money for all our friends - by magic! Payoffs? No problem, a night out at the Golden Laundromat casino and a big win guaranteed. Priceless. Hot money from obscure sources, no problem! Let's say I have £100,000 of dirty money, I axe my friend to spend it for me in my casino, he blows £90,000 in my casino he keeps £10,000 and he has a good time. Now I have £90,000 in clean money. Later when Mr Tax Minister wants to know what happened to the money, I misfortunately paid it all out to our friends from abroad who frequent the casino. Everybody wins! Golden Laundromat casinos, where the dirty money goes round and round and comes out spotless.

He can't split from his partner now* -what about the Super Casinos bill! This is very important to our financial plans. Let's remind him what happened to our friend Mr Calvi. 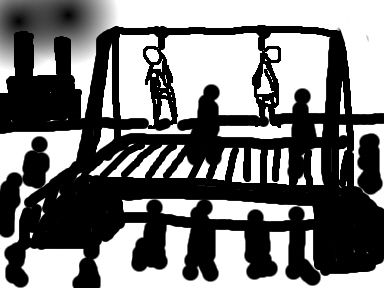 Download our free Iranian Ministry of Tourism computer desktop "wallpaper" by right-clicking above and selecting "Set as background".

Awake! for morning in the bowl of night
Has flung the stone that sets the stars to flight
And lo! the hunter in the east has caught
The sultan's turret in a noose of light

The Persia of Omar Khayyam lives on, in this proud modern state, where we hang homosexual teenagers and our doctors surgically cut out eyes as a judicial punishment. Contact us for details of times and dates.

"Italy, I liked it so much I bought the country" - Berlusconi

Advertisements by Gombeeeeeeeeeeeeen™
Posted by wire: 6:08 am No comments: