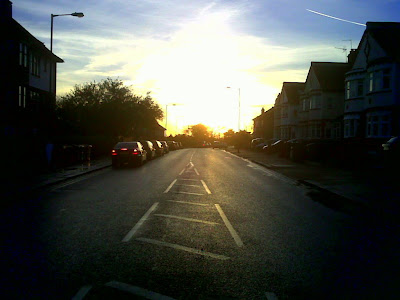 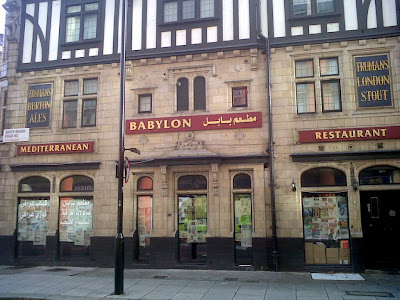 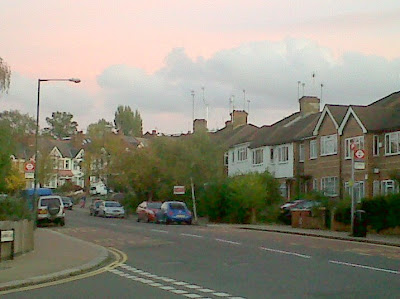 It's a very bad picture but just so you know we had powder blue clouds this evening in a peachy pink sky.
Posted by wire: 10:21 pm No comments: 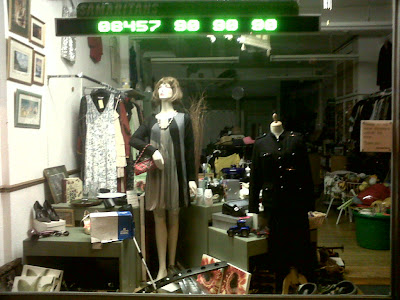 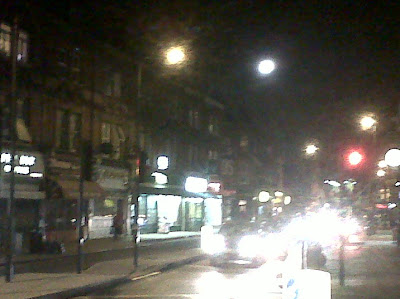 The ghost of Concorde 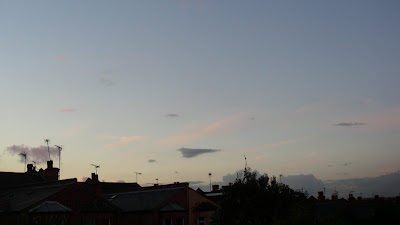 
Without a bag lady the earth would career
Out of its orbit and into the sun
She balances boxes of air and beer -
Nobody does it and it has to be done.

Without a bag lady cars would careen,
Forever speeding where children run.
She crosses, recrosses, slow and serene -
Nobody does it and it has to be done.

Without a bag lady inspecting the bins
Streetwalkers would walk the night alone.
She makes her own way, forgiving all sins -
Nobody does it and it has to be done.


* J. is a quiet soul who wanders the streets of Willesden carrying several bags full of other bags and empty packets and pulls a shopping trolley with more of the same. She is neither a small lady nor very tall and she wears a bandana.

Martha Postlethwaite hunted me for 20 years
Till at last I lay panting under her flashing teeth.
She stole her prize but in the taking
My heart burst and she lived forty years a widow.
Na na na na na.

As a child I liked nothing better
Than to roll and tumble in the hay in Art Poorly's barn
But on my first day as a hand on the harvest
I daydreamed and got rolled and tumbled
By Art's new combine harvester
And so I met my baleful end.

The local party chose me to present our town's gift
When Taft’s whistlestop train arrived.
I waved as the President left and he waved back.
Joe Fulbright was the proudest stationmaster in our state.
But when Washington shut the railroad down
Pa took to drink and overturned our wagon
Into the Spoon River one icy night.
He tried to save me but my hair caught in waterweed.
Now he's a Democrat.

They said it was a shame how I never ventured into town
Though I had travelled to the onion domes of the Kremlin
And to the minarets of Aya Sofia
And from the cafés of Paris
To the street barbeques of Manila.
But with all my knowledge
I brought home an embarrassing disease
Right when Doc Slein's daughter took over the practice
And that's what got me in the end.

To this much at least they all could agree:
Discretion was not the best part of Valerie.

Dory and Cory Muggins named their son Pleat
After an ancestor who sailed with Vasco Da Gama.
He was surly and never learned, though able,
And massacred his family at the age of 16.
When hanging judge Crudmore asked
If he had anything to say in mitigation,
All he said was, "My name is Pleat".

Here lies Mickey Pride.
He laughed till he cried.
He cried till he died.

I shat myself, I pissed the bed,
I thought this & that, I lost my head,
I loved three or two or one.
That's the autobiography done.

Google freeloading on your wireless network

The Telegraph has missed the point. It's not the embarrassing but uninteresting emails of stupid people with no passwords on their networks, it's the annoying arrogance of Google in planning to use your wireless network identity as an indicator of location. For example be a person is walking down your street with a mobile phone using the Google Maps application. Google Maps is busy detecting where exactly he or she is, and in doing so it could scan for local wireless networks and recognise yours from its Streetview survey data, then use that to triangulate the person's location. The annoying thing is you are providing a service for which you are not being paid, though you are paying for its upkeep. They are using you, freeloading, without a by-your-leave. It's a matter of principle.

BBC iPlayer: "What brought one of the most compelling modern European poets to a perfectly ordinary street in North London? Who did he visit there? And what made him write a poem about the experience? The writer, Toby Litt, investigates this most improbable of brief encounters between Paul Celan, the master elegist of 20th century Jewish experience and Britain at the end of the Sixties."

Mapesbury Road runs from Shoot Up Hill, which is between Kilburn and Cricklewood to Willesden Lane at Brondesbury Park to be precise. It's not as somebody says in the commentary "...North Kilburn ... South Cricklewood ... a no man's land", it's got a serviceable name of its own: Mapesbury, and is an official conservation area. There are a lot of magnolias all around here to this date. (More: Mapesbury - Wikipedia) (Ed.)
Posted by wire: 1:10 pm 2 comments:

Your forefathers could describe a forest in one twig, could perform their deadly thunder feats without appearing to move a muscle, could split a metaphor head to crotch with the blow of a single phrase. Do ye lie abed pleasuring yourselves while armies of creeping mumblers invade our ancient fields? Rise and send forth your magic incantations before the whole world sinks under the dreary wave. www.willesdenherald.com

Songs from the Road

Fete on the Green

Saturday, October 2: Autumn fete at Willesden Green Library run by Brent Libraries, Arts and Heritage in aid of the Royal National Institute for the Blind (RNIB)

Very lively, loads of events and stalls. It looks like everyone had fun, all smiles and thumbs up.
Posted by wire: 12:33 pm No comments:

The Spotted Dog site fenced off 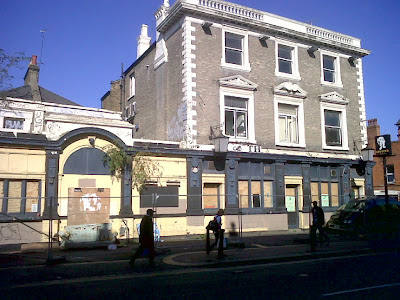 Derelict for two years since closing, work appears to have begun on The Spotted Dog. The site has been fenced off and tidied a bit. There is an excavation underway on the east side of it.
Posted by wire: 12:16 am No comments: 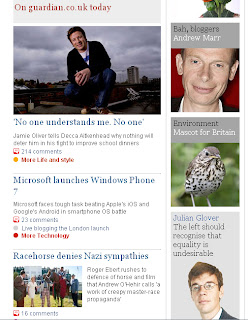 Re: Controversy over the film "Secretariat"

"Happy Birthday to ya." Good wishes to Yoko, Sean, Julian and Cynthia and fans everywhere.
Posted by wire: 6:59 pm 1 comment:

A woolly Michael Heseltine, flustered and throwing roundhouse ad hominem remarks is floored by Ken Loach, who simply points out that a 5% tax on the top 10% of the rich would pay for the entire national debt. It takes the others a time to realise the absurdity of their counter-arguments, "But what will the poor contribute?" and "What will the unemployed contribute?" If they cannot see the absurdity of those questions then "there are none so blind". Heseltine says the rich will leave the country and Loach responds, "So the rich have to be bribed to stay in the country" while the poor have to be forced to pay for the national debt. The logic that the rich who benefitted from the financial bonanza should be forced to pay for the clean-up after it crashed seems unarguable. Why is the Labour party supine about this, will it never recover from Blair's sell-out to big business and vested interests? 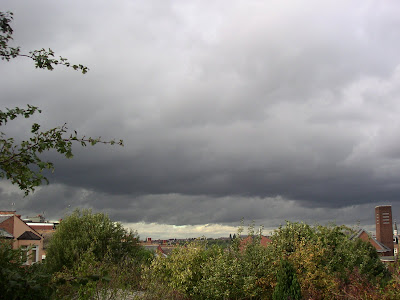 The view from Herald House, Sunday
Posted by wire: 5:48 pm No comments:

Back to the Futura

Welcome to the Cabaret Futura "Cabaret Futura is every third Monday of the month at Paradise by Way of Kensal Green; entry £10" (Park Life)

Richard Strange: "After a long period of consideration, and a lot of encouragement from friends and family, I have relaunched Cabaret Futura..."
Posted by wire: 1:44 pm No comments: