Good bits from The New Yorker:

This is interesting. The rhythm of a daily walk. Easy to read, unusual format, a little repetitive at first, but mirroring the awful emptiness that assails some of us: Recuperation - by Roddy Doyle. It's not without its highlights and even a shot of redemption. Well worth a read. Brilliant is probably the word I'm looking for.

The seafront really isn’t the sea but the Bristol Channel: Wales is a blue line of hills on the other side. The district council has brought sand from elsewhere and built a complicated ugly system of concrete breakwaters to keep it in and make the beach more beachlike, but the locals say it’ll be washed away at the first spring tide. Determined kids wade out a long way into soft brown silt to reach the tepid water, which barely has energy to gather itself into what you could call a wave. It’s hard to believe that the same boys and girls who have PlayStations and the Internet still care to go paddling with shrimping nets in the rock pools left behind when the tide recedes, but they do, absorbed in it for hours as children might have been decades and generations ago.

A new Haruki Murakami: The Hunting Knife. So much to read, so little time.

Screenwriter - by a great writer, Charles D'Ambrosio. I must read this before very long.

Tooth and Claw - by T. Coraghessan Boyle. I probably won't read this, though I have glanced it over a few times. He's not a bad writer, but he spins things a bit too thin for my liking.

A Christmas box from writeThis.com.

Email ThisBlogThis!Share to TwitterShare to FacebookShare to Pinterest
Labels: literary, Ossian, Sloe Wine
Season's greetings to all our disloyal readers

Howling Laud Hope's Christmas message to the nation. [For budgetary reasons it's the same as his election message earlier this year - Ed.]
Posted by wire: 4:08 pm No comments:

The sun is setting on Willesden, 2003

These pictures don't do justice to the scene this evening.

Serial confessers confess to everything

Jeffrey Archer missed a trick. If you're on a charge for anything, give Colonel Gaddafi a bell. He'll confess to anything on behalf of Libya, if you tell him you'll buy some of his oil. Nobody believed they had anything to do with the Lockerbie bombing, but as Gaddafi said they were willing to pay compensation - without admitting guilt - and it would smooth their path to the markets, then he'd do it. Now they've cut a deal with him to "dismantle his weapons of mass destruction." How wonderful these WMD are, they're like the Emperor's New Clothes (ENC) - invisible, but all the courtiers are afraid to be admit that they can't actually see them. Listen to the voice of a small child in the crowd: "The Emperor has no clothes!" He's nude as a Mexican hairless dog.
Posted by wire: 11:04 pm No comments:

So which is it?

Either there are WMD in Iraq and everybody there needs protective clothing, or there aren't and they don't. Which is it? Why are the forces there not wearing protective clothing? It's clear from their disposition that they do not believe there are WMD present. So why does Blair continue to repeat the lie? If it's true after all, then there was criminal negligence in sending the forces in unprotected.

There was 40% too few nerve agent detector units and the MoD's entire stock of 4,000 vapour detection kits, used by troops when they unmask after a suspected chemical attack, was found to be unserviceable.

"Difficulties" in providing enough NBC protection suits in some sizes were found and some gas masks did not fit as well had been thought. - BBC News / National Audit Office Report.

Were they really in such a hurry to comply with His Master's Voice that they were prepared, just as in the 1914-18 war to sacrifice battalions of British youth for nothing - nothing but a craven face-saving exercise for Whitehall time-servers. 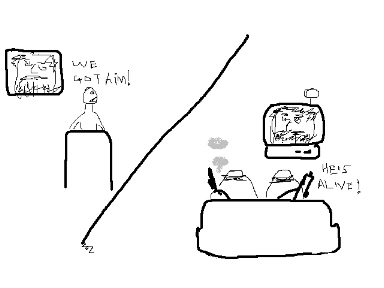 When the tyrant went to ground

This is where he was holed up: Guardian Interactive.
Posted by wire: 11:19 pm No comments:

Email ThisBlogThis!Share to TwitterShare to FacebookShare to Pinterest
Sports

Go to work on an egg 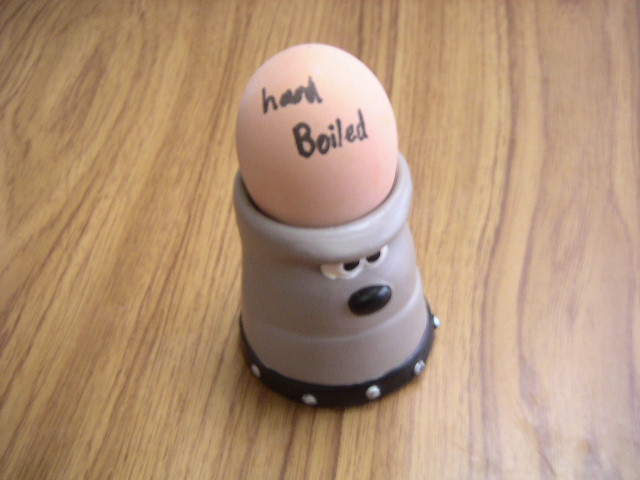 Now that's what I call consideration. It was nice to come down to this today. I was the last to get up (as usual) after the others had left. 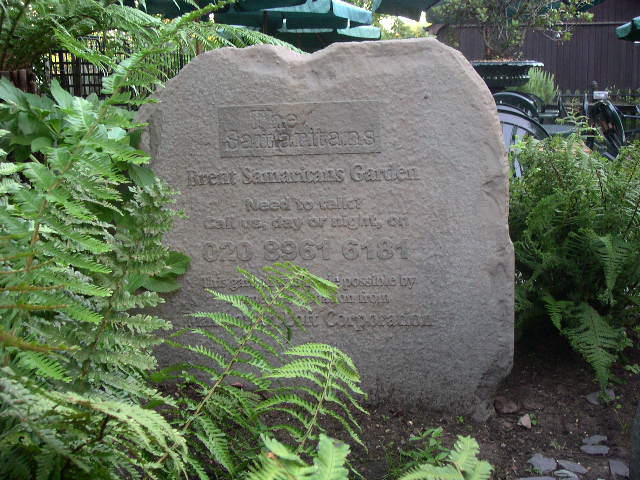 He gave the little that he had
To build a house for fools and mad;
And shew’d by one satiric touch
No nation needed it so much.

"As Dean of St. Patrick's Cathedral in Dublin, Swift's desire to improve conditions for the oppressed, the poor and the alienated grew. These concerns became the blueprint for a dedicated psychiatric hospital free of the abuses of the institutions at the time with an independent board of governors which would protect patients and safeguard the hospital's ongoing development and improvement.

"On October the 19th 1745 the venerable and sick Dean died, leaving his entire estate, derived from royalties of his writings including his great satirical work, Gulliver's Travels, for the founding of a hospital for the psychiatrically ill, the first in Ireland ..... It is now the oldest, purpose built psychiatric hospital continuously functioning on its original site in these islands and one of the oldest in the world. "

Swift himself "lapsed into dementia" three years before his death. He was wrongly thought to suffer from mental illness in his lifetime, having suffered from the early age of 23 what is now known to be Meniere's Disease, "a disturbance of the inner ear that causes vertigo and nausea. There was no treatment for it in Swift's lifetime and his fortitude must have been extraordinary."

According the Herald's Simon Moribund, "Microsoft founder Bill Gates should follow Dean Swift's example and donate some of his billions to help those afflicted with chronic and acute melancholia caused to computer users by his products."

If you are feeling suicidal [maybe you could] contact The Samaritans. [Not a bad idea, Feargal. I'll make a note of that. Ed.] You can talk confidentially to them on the phone.

Feargal Mooney
Posted by wire: 4:31 am No comments:

This is what you should be seeing: screenshots. If not, your fonts are to cock. Trust me, I'm a programmer.

Top-up fees - what a load of fuss over nothing!

All these scare stories about students leaving University with debts for life - what a load of bosh! Surely it is very clear that Daddy and Mummy will pay those amounts for all but the terribly wretched. As for those, they can always apply to the authorities under whatever Poor Law pertains, for state support. It's so simple, I'm surprised the vast majority of people in the country can't see it. That in itself is a testament to the dismal inadequacy of such places as the "Ball's Pond Road University," as referred to by the spokesman for the Higher Charges Campaign on Newsnight on BBC2 last night. Surely people who attend such temples of ignorance cannot be expected to pay the amounts (soon to be) demanded by good universities? The cheapo places will be there for them, and let's not forget they will be in a lot of debt either way - as they are at present. The government already gives larger amounts to the best universities and always will, which nobody minds, but what we are trying to establish is that people who are able to pay more should be able in some way to differentiate themselves from people who can pay less. We're fed up with all the hopelessly vulgar people flooding the best universities, to the extent that it is now a matter of chance whether a public school applicant is chosen over a bog-standard school supplicant. Surely all this is obvious to the vast majority of the people?

The award is for this statement by US Defence Secretary Donald Rumsfeld to journalists at a press conference:

There is nothing on earth the matter with that, is there not, or is there? It does not seem more or less unclear to me than any below average utterance or above.